Alpha Persei is also called Mirfak and is considered the star marking ‘the elbow’ of the constellation Perseus. It is approximately 60 times the size of the Sun and has 7.3 solar masses. In fact, if Mirfak was situated where the Sun is from Earth, it would cover several thousand times more sky.

Alpha Persei is located approximately 510 light-years from Earth in the constellation of Perseus. It is the 24th largest constellation in the heavens. This constellation is also home to a number of deep space objects and an annual meteor shower named, Perseid. In addition, Mirfak is also a bright member of the Alpha Persei Cluster.

Mirfak can be seen in its home constellation located in the first quadrant of the northern hemisphere, specifically between latitudes of +90 and -35 degrees; north of New York City this star never sets under the horizon. Alpha Persei can be observed with the unaided eye and lies between the Pleiades Cluster and the North Star (Polaris). 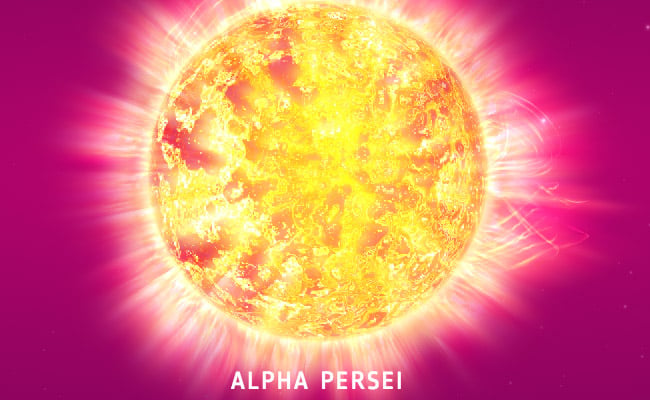 Alpha Persei is a supergiant star that is evolving into the last stages of its existence. It is approximately 60 times the size of the Sun and has 7.3 solar masses. In fact, if Mirfak was situated where the Sun is from Earth, it would cover several thousand times more sky.

This star out shines them all in its home constellation and is one of the brightest overall in the night sky. It is rated at 7,000 times more luminous than the Sun and shines with an apparent magnitude of 1.806. In addition, this star is burning at an effective temperature of 6,350 Kelvins (10,970 degrees Fahrenheit or 6,076 degrees Celsius) which is what gives it that yellow-white glow.

Although, there is no mythology specifically associated with Mirfak, Perseus the constellation does represent the Greek hero (Perseus) who decapitated Medusa. In addition, this constellation was one of the first to be catalogued in the 2nd century by a Greek astronomer known as Ptolemy. In native Hawaiian astronomy, this star is called, Hinali’i and represents a great tsunami which was thought to begin the separation of Maui.

Alpha Persei is not just another twinkling celestial object, it has some cold hard facts and true significance. So if you have a chance to view this star of “the elbow” in the night sky be sure to check it out.

Fly to Alpha Persei in 3D!