Alcyone is the third brightest star in its home constellation and also the brightest star of the Pleiades or Seven Sisters. In fact, it’s name means “the Central One.” In Greek mythology, Alcyone represents the Atlantid nymph who later became the mother of Hyrieus. Alcyone is a multi-star system consisting of four stars, together spanning 10 times the radius of the Sun.

Alcyone is located in the shoulder blade of Taurus (the bull) constellation. It is the main and biggest star of the Pleiades or Seven Sisters and in fact, its name means “the Central One.” Because these stars are all situated within one degree of one another, Alcyone is often times used to represent the entire group. China refers to this bright wonder as, “the Sixth Star of the Hairy Head.” In addition, this star lies about 400 light-years from Earth which converts to 2,351 trillion miles or 3,783 trillion kilometers.

The good news about Alcyone is it can be seen with the naked eye and will put on a good show in the Autumn months. Due to its brightness, this star can also be used as a landmark star to find Taygeta by “drawing a line” through the neighbouring star of Maia. 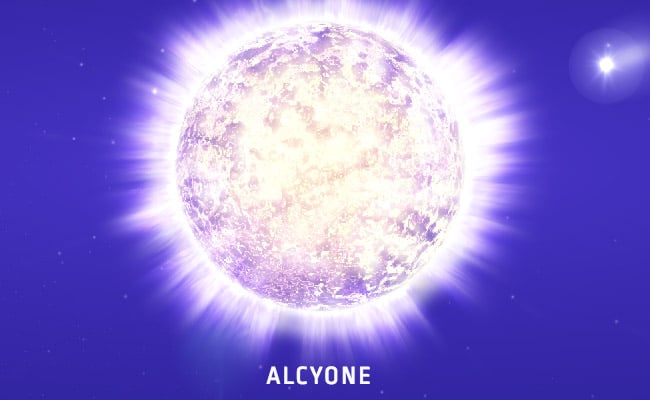 Alcyone is a multi-star. Check out her companions and components.

Alcyone is the brightest star in the Pleiades (Seven Sisters) and the third brightest star in the constellation of Taurus, shining with an apparent magnitude of 2.873. This star spans 10 times the radius of the Sun and burns at an extreme temperature of 13,000 Kelvins; 22,940 degrees Fahrenheit or 12,726 Celsius.

Historically, Alcyone found its way on both Italian astronomer, Riccioli’s (1598-1671) Astronomia Reformat and also by Hipparcos (circa 160-120 B.C.) Oxus and Oxutatos. However, Ptolemy failed to mention it in Syntaxis. In Greek mythology, Alcyone represents the Atlantid nymph who later became the mother of Hyrieus. As the legend tells, Alcyone and her husband, Ceyx were so in love they often called themselves Hera and Zeus. The gods heard this and were enraged. They decided to punish the couple by sinking a ship Ceyx was travelling on. Alcyone searched and begged for her husband’s safe return, but when she finally saw the details of his death through an oracle, then found his lifeless body washed up on shore, Alcyone threw herself into the ocean to join her husband in the afterlife. Zeus then turned the lovers into Kingfishers or Halcyon birds. It is believed that each year for two weeks the waves calm so these birds can nest. It is still referred to today as, “the halcyon days.”

Alcyone is not just another twinkling celestial object, it has some cold hard facts and true significance. So if you have a chance to view this bright star of the Seven Sisters, be sure to take a peek at one of the most intriguing views you may ever experience.

Fly to Alcyone in 3D!