Alpha Ophiuchi is also called ‘Rasalhague’ and can be found in the constellation of Ophiuchus. It’s a binary star system with its main star being 2.4 times the mass of the Sun. This star system is the brightest in its constellation and the 69th most luminous in the night sky. It came very close to the Sun around 389,000 years-ago.

Alpha Ophiuchi is located approximately 48.6 light-years from Earth in the constellation of Ophiuchus. It is the 11th largest constellation in size and is represented by a man holding a snake, who is thought to be Asclepius a famous healer in Greek mythology. This constellation is also home to many deep space objects, notable stars and nebulas.

Rasalhague can be seen in its home constellation located in the third quadrant of the southern hemisphere, specifically between latitudes of +80 and -80 degrees. It can be observed with the unaided eye low in the east at dusk, then moves steadily towards the south climbing high into the night sky. However, the companion star is much dimmer and smaller than the primary and cannot be seen without the aid of a telescope. 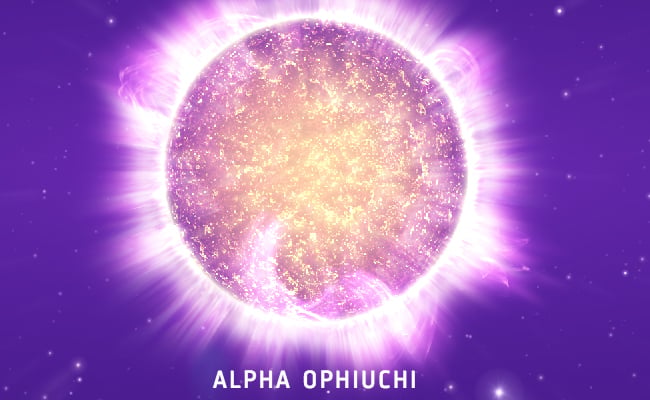 The star is considered a binary with its primary component being a white giant star with a stellar classification of A5 III. It has 2.4 times the mass of the Sun and is burning up its hydrogen fuel at its core. This will make the star’s core shrink and become much hotter, as its outer shell swells. Once this occurs, the primary component will move into the giant star phase of its life. Alpha Ophiuchi-A is also a rapid rotator moving at speeds of 230 kilometers/second (142 miles/second). Due to this fast spinning, this star’s equator is bulging about 20 percent more than its poles, giving it an oblate spheroid shape. The companion star is thought to be an orange main sequence dwarf having only 85 percent of the Sun’s mass. These stars orbit each other over an 8.62 year-period.

Alpha Ophiuchi is the brightest star in its home constellation and the 60th most luminous in the night sky. It shines with an apparent visual magnitude of 2.07 and is estimated to be about 25 times more luminous than the Sun. This star came very close to the Sun around 389,000 years-ago which gave it a magnitude of 1.65. The outer shell of Rasalhague burns at an effective temperature of 8,000 Kelvins (13,940 degrees Fahrenheit or 7,726 degrees Celsius) which is what gives it that white color.

Even though there is no mythology surrounding Rasalhague itself, the constellation is thought to be a healer with a snake coiled around his body. In addition, this constellation was one of the first to be catalogued in the 2nd century by a Greek astronomer known as Ptolemy.

Alpha Ophiuchi is not just another twinkling celestial object, it has some cold hard facts and true significance. So if you have a chance to view the “the head of the serpent collector” in night sky be sure to check it out.

Fly to Alpha Ophiuchi in 3D!