Alpha Pegasi is also know as Marak or Marchab which means ‘the saddle of the horse’ in Arabic. It is the third brightest star in the constellation Pegasus and one of the four stars in the asterism ‘Great Square of Pegasus’. Alpha Pegasi is very hot and has expanded to almost five times the radius of the Sun.

Alpha Pegasi is located approximately 133 light-years from Earth in the constellation of Pegasus. It is the 7th largest constellation in size with Markab being one of the four stars in The Great Square of Pegasus Asterism. This constellation is also home to one Messier and a meteor shower (the July Pegasids).

Markab can be seen in its home constellation located in the fourth quadrant of the northern hemisphere, specifically between latitudes of +90 and -60 degrees. It is best observed with the unaided eye around the Autumn Equinox (September 23rd) east to northeast just above the horizon and can be viewed through until late March. The four bright stars of the asterism make up a giant square in the sky which is hard to miss. 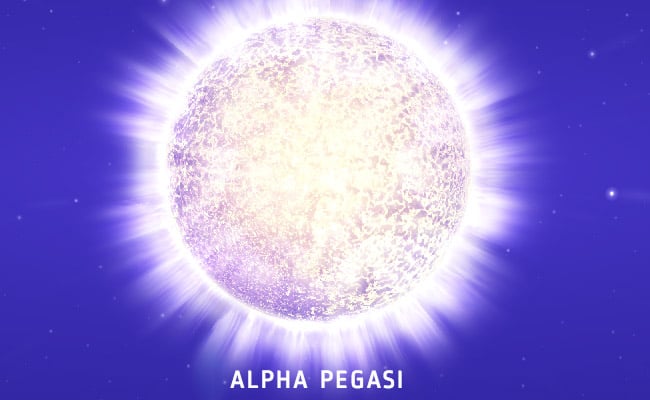 Alpha Pegasi is a B-type giant star which has run out of its core hydrogen supply and has now evolved beyond the main sequence. It is also a rapid rotator, spinning at speeds of 125 kilometers/second (77 miles/second). The effective temperature on the depth of this star’s outer shell is close to 10,000 Kelvins (17,540 degrees Fahrenheit or 9,726 degrees Celsius) which has allowed this star to expand to nearly five times that of the Sun.

Even though there is no mythology surrounding Alpha Pegasi itself, the constellation is thought to be in commemoration of the winged-horse in Greek mythology (ridden by Perseus) that swooped in to save Andromeda from the sea monster. In addition, this constellation was one of the first to be catalogued in the 2nd century by a Greek astronomer known as Ptolemy.

Alpha Pegasi is not just another twinkling celestial object, it has some cold hard facts and true significance. So if you have a chance to view this star of the Great Square of Pegasus Asterism in night sky be sure to check it out.

Fly to Alpha Pegasi in 3D!