Caelum is the eighth smallest constellation in the sky, occupying only 125 square degrees. It is located in the first quadrant of the Southern hemisphere and can be viewed specifically at latitudes between +40° and -90°. The crooked line of Caelum represents “the chisel” and derives its name from the Latin language.

Caelum was created in the 18th century by, Nicolas Louis de Lacaille, a French astronomer. It is neighbors with the constellations of Columba, Dorado, Eridanus, Horologium, Lepus and Pictor. In addition, Caelum does not contain any Messiers or stars with known planets, but it is home to a few galaxies. 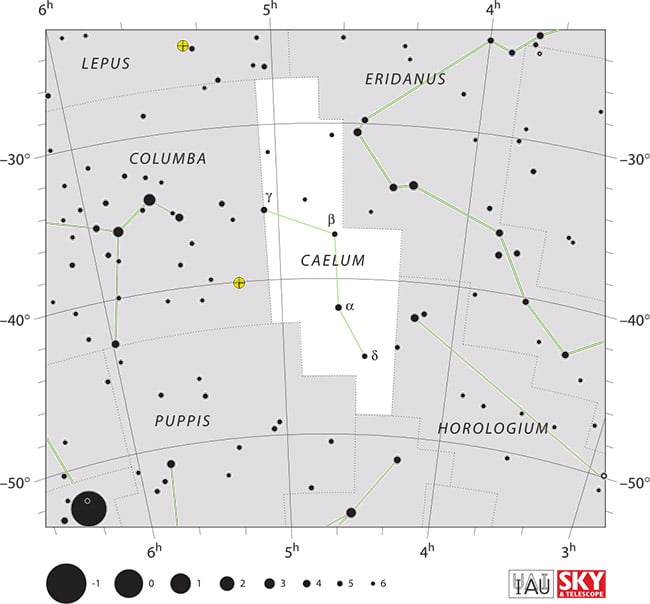 Being so small, Caelum only has three faint, yet still notable galaxies. Check them out;

The constellation Caelum contains three significant stars and two others that are noteworthy. Read on to discover their amazing qualities. 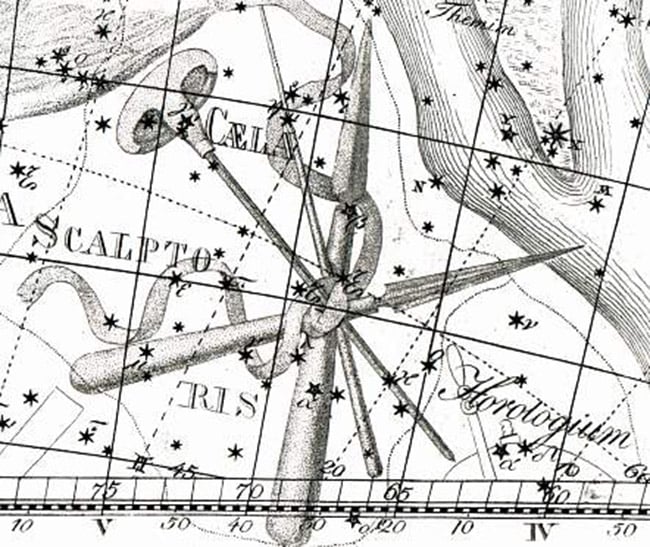 Caelum shown as Caela Scalptoris on Chart XVIII of the Uranographia of Johann Bode.

Out of all the stars that make up the Caelum constellation, none shine brighter than Alpha Caeli – even though it only shines with an apparent visual magnitude of 4.44. This star is estimated to be around 900 million years-old and is made up of two components. The main part of Alpha Caeli is a F-type main sequence star with a companion catalogued as a red dwarf. It is located 65.7 light-years from Earth.

There are no myths associated with Caelum. It got its name and position in the sky by a French astronomer (Lacaille). He created many constellations to represent tools and instruments. Caelum or the Sculptor’s Chisel (as it is also called) was published in Lacaille’s map of the Southern stars that was published in 1756.

Even though Caelum is small, it is still a fascinating constellation. So the next time you are gazing into the night sky be sure to search out this intriguing figuration of stars.