Aquila is a loose triangular-shaped constellation covering 652 square degrees in the fourth quadrant of the Northern hemisphere (near the celestial equator). It can be viewed at latitudes between +90° and -75°. Aquila represents the eagle of the Roman god, Jupiter and, in fact, gets its name from the Latin word meaning “eagle.”

Aquila is the 22nd biggest constellation and is neighbors with the constellations of Aquarius, Capricornus, Delphinus, Hercules, Ophiuchus, Sagitta, Sagittarius, Scutum and Serpens Cauda. In addition, Aquila has seven stars with known planets, as well as two meteor showers (the June Aquilids and the Epsilon Aquilids). 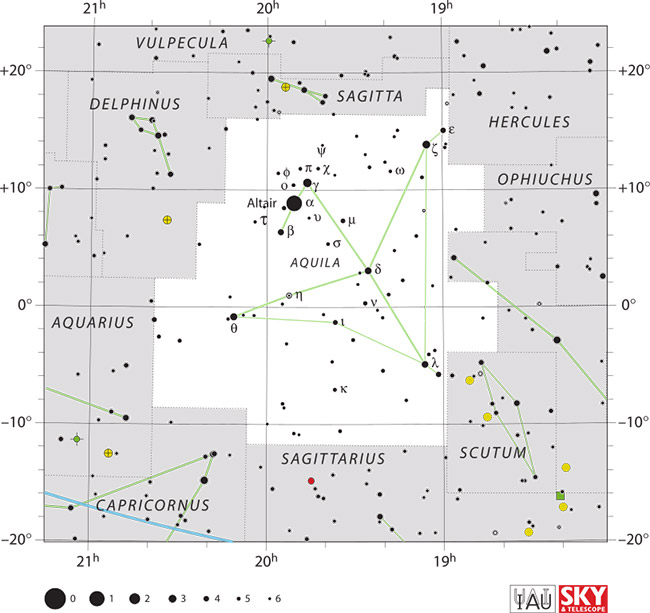 Although Aquila does not have any Messiers, it does contain four notable deep sky objects. Check them out:

The constellation Aquila contains six significant stars, but it also has four lesser (yet notable) stars making up its configuration. 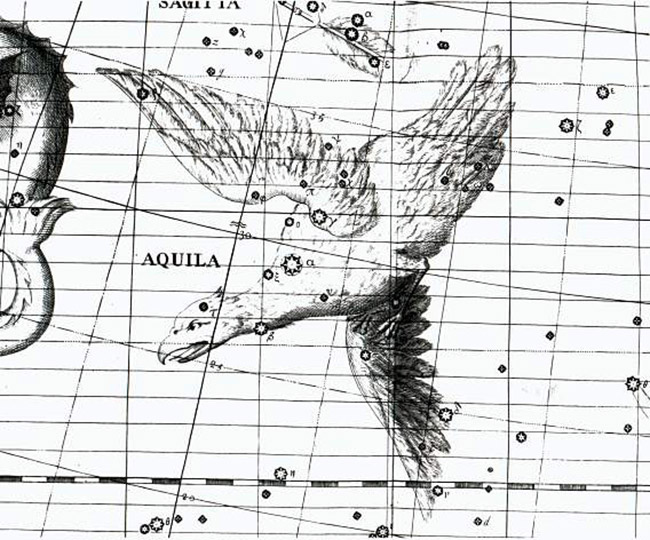 Aquila swooping across the pages of Flamsteed’s Atlas Coelestis (1729)

Out of all the stars that make up the Aquila constellation, none shine brighter than Altair or Alpha Aquilae. It is the 12th brightest star in the sky, shining with a visual magnitude of 0.77. It is a A-type main sequence star that sits about 16.8 light-years away and is 1.8 times the mass of our Sun. Altair gets its name from the Arabic phrase, an-nasr at-ta’ir, which means “the flying eagle.”

Aquila is steeped in mythology. In the Greek legends, this constellation represented the eagle that carried Zeus’ thunderbolts. It was also the eagle used to snatch away Ganymede (the youth Zeus desired and later stole to be a cup-bearer to the gods). Another myth has the eagle guarding the arrow of Eros – it hit Zeus, making him love-struck. Some mythology also speaks of Aphrodite disguised as an eagle in pursuit of Zeus. She then took on the form of a swan to chase Zeus to the shelter of his love interest, the goddess Nemesis. It is said that Zeus placed Aquila in the heavens to represent this occasion.

Aquila is a fascinating constellation, so the next time you are gazing into the night sky be sure to search out this intriguing figuration of stars.