Andromeda is the 19th biggest constellation and was first listed about 2,000 years ago by Ptolemy, who was a Greco-Roman scientist. It can be viewed from both the Northern and Southern hemispheres but is actually located in the first quadrant of the Northern hemisphere at latitudes between +90° and -40°. This fascinating astronomical wonder is also part of the Perseus group of constellations which includes Cassiopeia and Pegasus.

Andromeda got her name from being the wife of Perseus who was a Greek hero. This constellation is also referred to as the Chained Maiden, Persea (wife of Perseus), or Cepheis (daughter of Cepheus). This relatively simple grouping of stars can be best viewed between the months of February to August in the Northern hemisphere and between October and December in the Southern hemisphere. 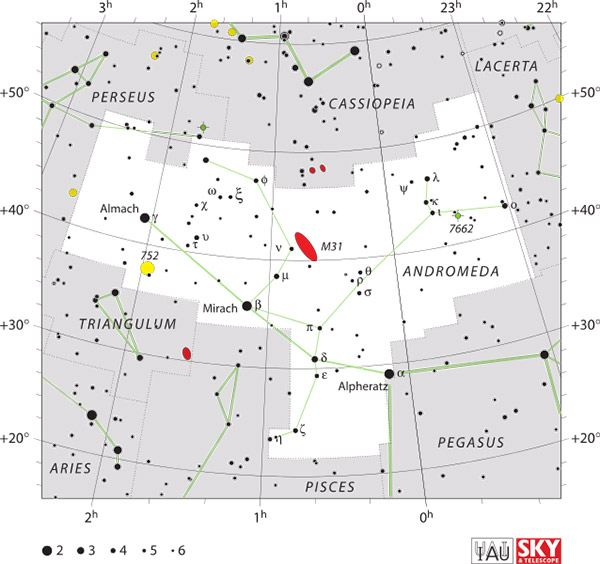 Andromeda is home to many deep star galaxies known as Messiers. Check them out. 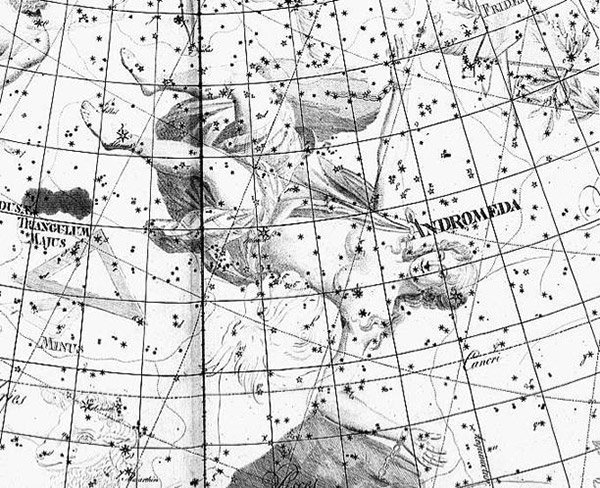 Andromeda chained to a rock, depicted in the Uranographia of Johann Bode (1801)

Out of all the stars that make up the Andromeda constellation, none shine brighter than Alpheratz (Alpha Andromedae). This binary star is classified as a B8 subgiant and shines with a hot-blue color. The brighter star making up this binary is made up of extreme levels of manganese and mercury and burns with a surface temperature of 13,800 K. Alpheratz can also claim to be the brightest mercury-manganese star known so far. The companion star in Alpheratz is 10 times brighter than our sun and also much larger. These stars orbit each other in 96.7 days.

Andromeda is surrounded in Greek mythology. It was thought that Andromeda was the daughter of King Cepheus and Queen Cassiopeia – who boasted about her own beauty to the sea nymphs. The nymphs became enraged at the Queen’s arrogance and complained to Poseidon. In retaliation, the sea god sent a sea monster to flood the King’s land. The only way he could return his land to its once glorious splendor was to sacrifice his daughter to Cetus. Andromeda was chained to a rock and left to die; however, Perseus came along and saved her (they were later married and had 6 children).

Andromeda is a fascinating constellation, so the next time you are gazing into the night sky, be sure to search out this intriguing figuration of stars.