Aquarius gets its name from Latin which means, water-bearer or cup-bearer and its Latin symbol also represents water. Aquarius was first catalogued in the 19th century by the Greek astronomer, Ptolemy. This unique constellation is the 10th largest and also represents a zodiac sign.

Aquarius can only be viewed in the fourth quadrant of the Southern hemisphere. It takes up 980 square degrees and is located specifically at latitudes between +65° and -90°. It also contains three Messiers, along with four meteor showers. 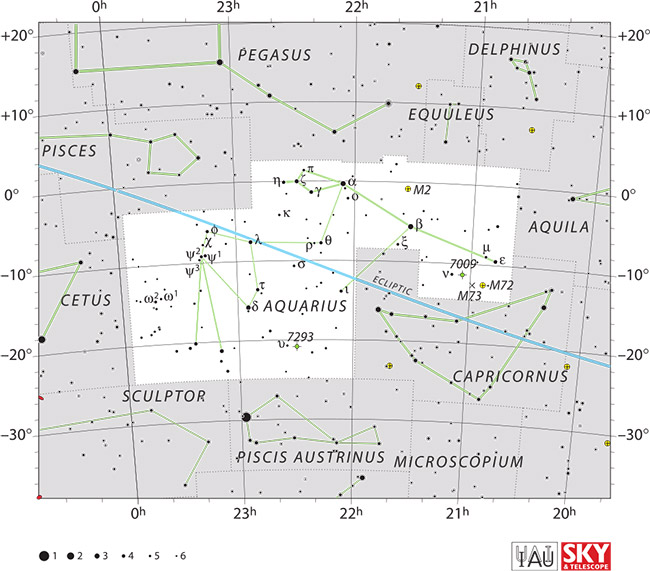 Aquarius is home to three galaxies known as Messiers. They were named after the astronomer who catalogued them, Charles Messier. It also has other notable deep space objects. Check them out.

The constellation Aquarius contains many stars that make up its shape; however, they can be narrowed down to just six predominant stars. 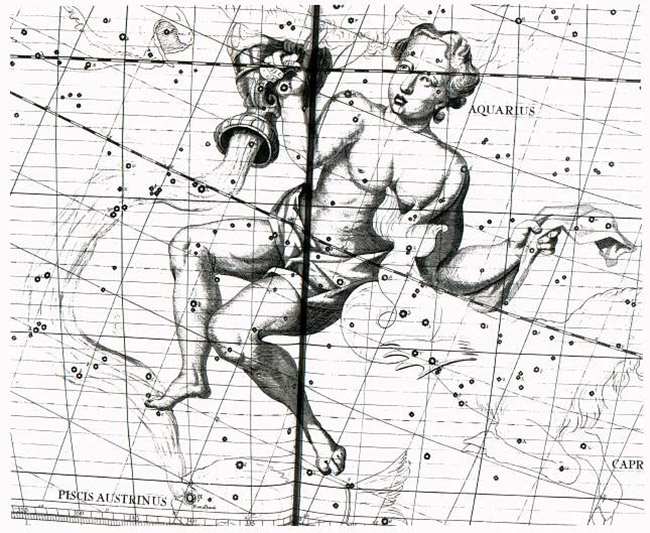 Aquarius and his water jar, from the Atlas Coelestis of John Flamsteed (1729).

Out of all the stars that make up the Aquarius constellation, none shine brighter than Sadalsuud or Beta Aquarii. This star is a rare yellow supergiant and can be viewed at a 2.91 magnitude. It is located about 610 light-years away and has a mass 6 times our Sun. This star is also thought to bring luck after a long winter. In fact, its name in Arabic (sa’d al-suud) means “luck of lucks.”

Aquarius is surrounded by a number of myths. The constellation represents a man pouring liquid from a water jar into the mouth of a fish. In Greek mythology, Aquarius is thought to have been associated with Ganymede – a handsome young man that caught the eye of Zeus. To capture Ganymede, Zeus disguised himself as an eagle and stole the youth away to serve as a cup-bearer to the gods. Egyptian legends has Aquarius representing the god of the Nile, while Babylonian mythology believe Aquarius was there to represent the god (Ea) himself.

Aquarius is the eleventh sign of the zodiac. People born between January 20th and February 18th are Aquarians. Some characteristics of people born under this sign are;

People born under the Aquarius sign do tend to be a bit aloof, stubborn and very sarcastic at times. They do not like to be tied down and love the freedom and independence of their own desires. However, once you become friends with an Aquarius, they will be loyal and devoted, moving mountains to make people laugh and to feel good. Although Aquarius can be rebellious they do tend to be progressive thinkers that make good politicians and social workers.

Aquarius is a fascinating constellation, so the next time you are gazing into the night sky, be sure to search out this intriguing figuration of stars.