Ara is somewhat triangular in shape and covers 237 square degrees in the third quadrant of the Southern hemisphere. It falls 63rd in size and can be viewed at latitudes between +25° and -90°. Ara represents the altar to the Greek gods and derives its name from the Latin language.

Ara neighbors with the constellations of Apus, Corona Australis, Norma, Pavo, Scorpius, Telescopium and Triangulum Australe. In addition, Ara has seven stars with known planets, but does not contain any meteor showers or Messiers. 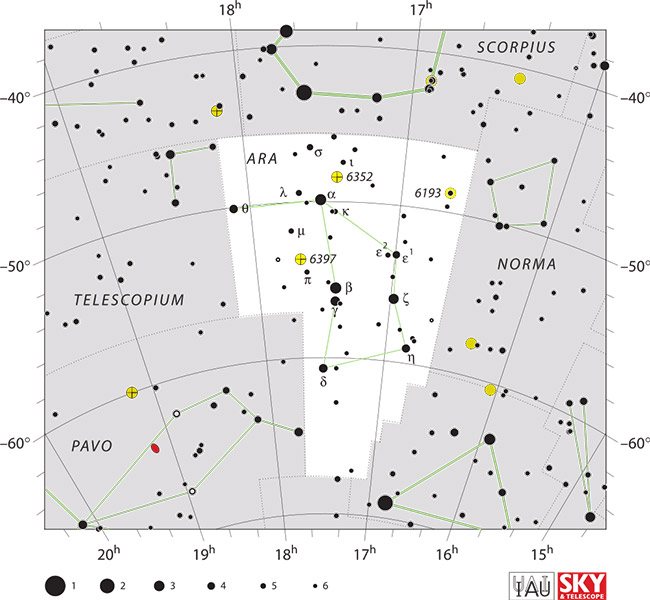 Ara may be smaller in comparison to other constellations, but it still contains three notable deep sky objects. Check them out; 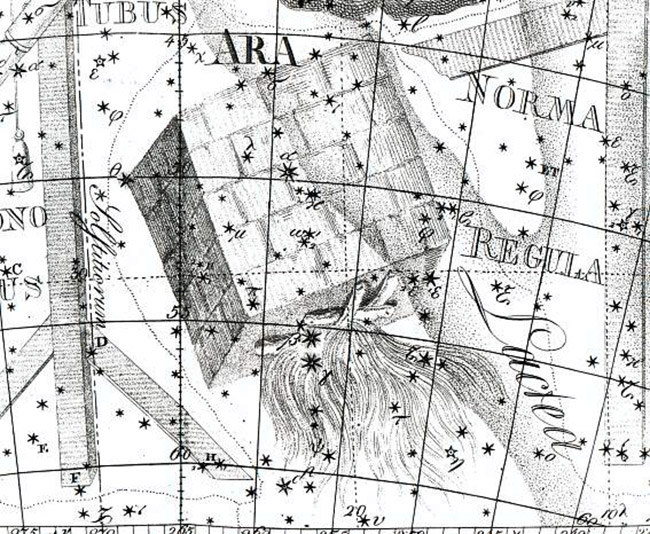 Johann Bode showed Ara looking more like a brick barbecue than an altar on his Uranographia of 1801.

Out of all the stars that make up the Ara constellation, none shine brighter than Beta Arae. It is known as an orange K-type bright giant, which could possibly be a supergiant. It shines with a 2.84 magnitude and is approximately 603 light-years from Earth.

Ara is steeped in mythology, but the two prevalent ones both involve the Greek gods and an alter. In the first myth, Zeus and the other gods make a vow on an altar to overthrow Cronus (ruler of the universe) and defeat the Titans. In another tale, the King of Acadia (Lycaon) tried to feed Zeus a dismembered child, then attempted to kill the god as he slept. When Zeus awoke he was angered and changed Lycaon into a wolf, then killed his fifty sons with his lightning bolts. Ara is said to be there to commemorate the altar of Lycaon.

Ara is a fascinating constellation, so the next time you are gazing into the night sky be sure to search out this intriguing figuration of stars.