Bootes is the 13th biggest constellation in size and covers 907 square degrees. It can be viewed in the third quadrant of the Northern hemisphere and lies specifically at latitudes between +90° and -50°. To correctly say, Bootes, each “o” is pronounced separately, putting emphasis on the “tes.”

The major stars in Bootes form a loose rectangle/triangle pattern and it derives its name from the Greek origin meaning, plowman, ox driver or herdsman. Bootes neighbors with the constellations of Canes Venatici, Coma Berenices, Corona Borealis, Draco, Hercules, Serpens Caput, Virgo and Ursa Major. It does not contain any Messiers, but does have stars with known planets. 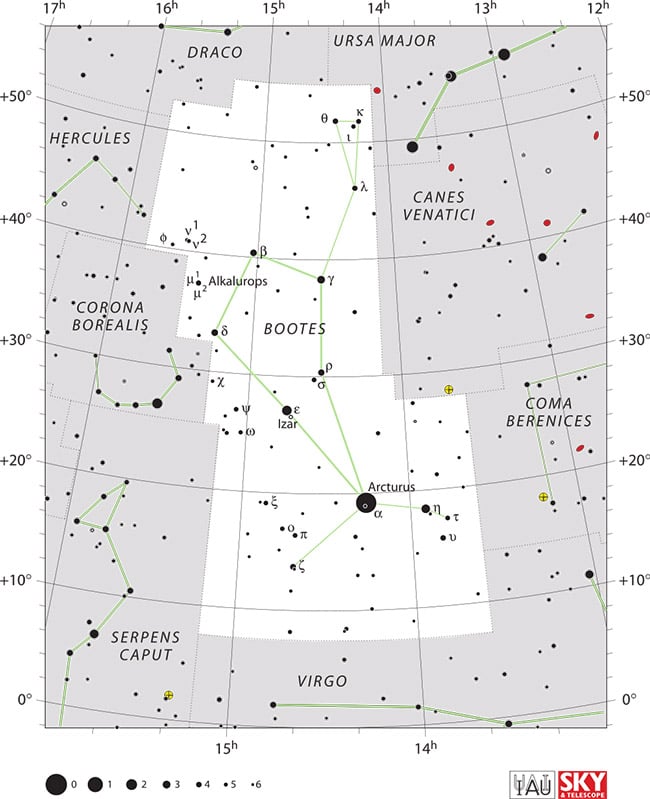 Bootes is home to three fascinating deep sky objects including a Supervoid, a Dwarf Galaxy and a Globular Cluster. Check them out; 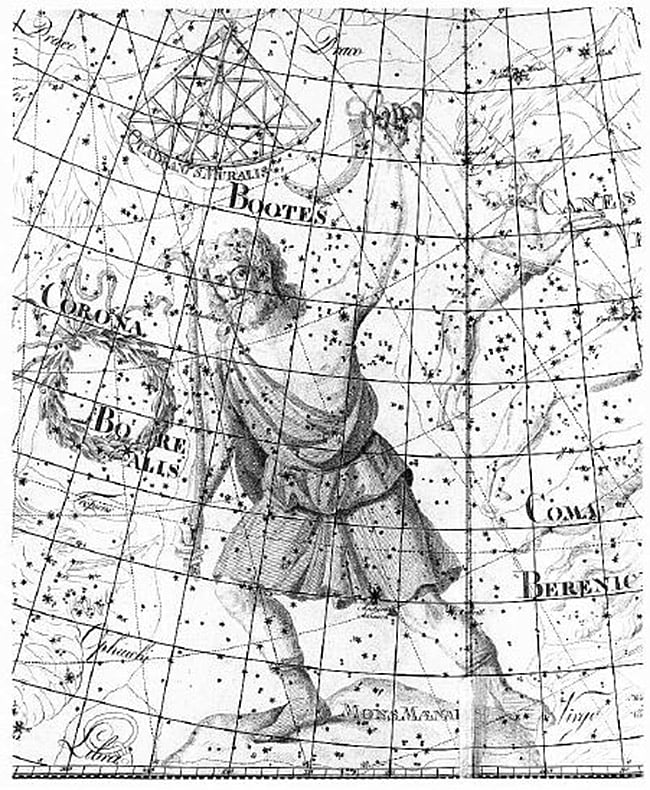 Boötes on Chart VII of the Uranographia of Johann Bode (1801).

Out of all the stars that make up the Bootes constellation none shine brighter than Arcturus. This star is listed as the third individual brightest star in the night sky, shining at an apparent visual magnitude of -0.04. In fact, it shines 110 times brighter than our Sun and is classified as a K1.5 IIIpe orange giant. Arcturus derives its name from the ancient Greek language and means, “Guardian of the Bear,” because it is located in the left foot of the herdsman.

The history of Bootes depicts this constellation as a herdsman with a club in one hand and his two leashed dogs in the other (Asterion and Chara; represented by Canes Venatici). It was once thought that the herdsman followed Ursa Major around the pole; his oxen are tied to the polar axis which keeps the stars in motion.

The most popular myth associated with this constellation; however, involves Zeus and his son Arcas. Arcas was raised by his grandfather (Arcadian King Lycaon). One day the king decided to test Zeus by killing Arcas and serving him to Zeus to eat. Zeus was enraged and turned the king into a wolf, then killed all his children with his lightning bolts. Zeus then brought Arcas back to life. As the myth goes on, Arcas was the product of an affair Zeus had with King Lycaon’s daughter, Callisto. When Zeus’ wife heard of this love-child she transformed Callisto into a bear. Years later, as Callisto roamed the woods, she came upon her son. Not realizing this was his mother, Arcas chased the bear until they ended up in a sacred temple. To avoid any further trouble, Zeus placed both of them in the sky; Callisto is Ursa Major and Arcas as Bootes.

Bootes is a fascinating constellation, so the next time you are gazing into the night sky be sure to search out this intriguing figuration of stars.