Aries means “the ram” in Latin and represents the horn of this animal. It can be found in the first quadrant of the Northern hemisphere and is located specifically between latitudes of +90° and -60°. Aries is part of the Zodiac chart and like all the Zodiac signs, it was first catalogued in the 2nd century by Ptolemy, who was a Greek astronomer.

Aries is a simple crooked row of stars and is the 39th largest constellation in the night sky. It occupies 441 square degrees and is neighbors with Cetus, Perseus, Pisces, Taurus and Triangulum. This constellation only has six stars, but it is associated with several well-known meteor showers such as, the May Arietids, Autumn Arietids, Delta Arietids, Epsilon Arietids, Daytime-Arietids and Aries-Triangulids. 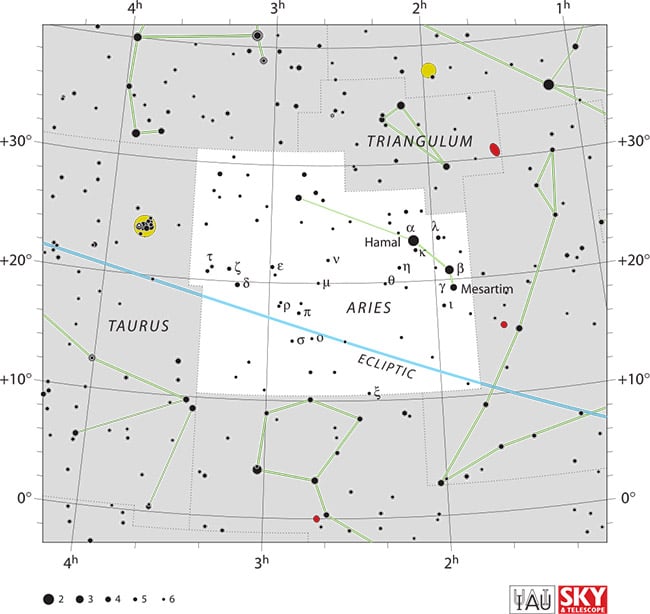 Aries has only four notable deep sky objects. Read on to discover some fascinating facts about these celestial wonders.

The constellation Aries contains six main stars that makes up its shape. Let’s explore them further. 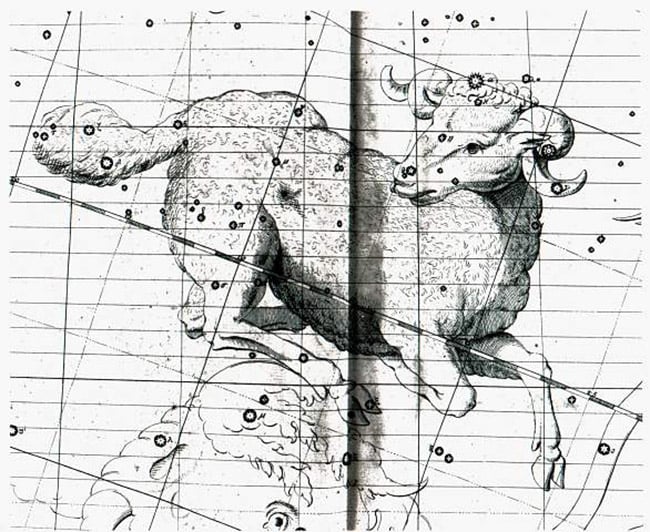 Aries, the ram with the golden fleece, from the Atlas Coelestis of John Flamsteed (1729)

Out of all the stars that make up the Aries constellation, none shine brighter than Hamal or Alpha Arietis. It is the 48th brightest star in the sky and is considered a K-type orange giant with a magnitude between 1.98 and 2.04. Its name is from the Arabic phrase, rās al-ħamal, which means “head of the ram.” It is located only 66 light-years in distance from the Earth.

Aries has a fascinating history as well as an interesting myth that surrounds it. Aries dates back as far as the Babylonians. It was here that this constellation got its name and its “ram” symbol. In the 7th century BC, the Neo-Babylonians revised their zodiac. This placed Aries very close to the vernal equinox, giving it a high standing on the zodiac chart, as well as a place in the celestial movement of the Sun crossing from North to South. However, since then, with the movement of Earth’s axis, Aris is no longer in the vernal equinox.

In Greek mythology, a golden ram was sent to save the children (Phrixus and Helle) of a Boeotian King – their stepmother hated them and set them up as a sacrifice. When the twins real mother heard of this devious plan she sent a winged, golden ram to rescue them. As the ram was flying East to Colchis, Helle (the daughter) fell off into the sea, but the son made it. In honor of his arrival the King sacrificed the ram and present Phrixus with its Golden Fleece and also his daughter’s hand in marriage.

Aries is the first sign of the zodiac. People born between March 21st and April 19th are in this sign of the ram. Some characteristics of people born under this sign are;

However, Aries do tend to be a bit moody, controlling and impatient. They do not like to be controlled and will fight back and even throw temper tantrums when they do not get their own way. This sign makes a good friend, as they are protective and caring and will always look out for their loved ones. Aries make good activists and are quick to jump on a new idea or for a new cause, but when that endeavor loses its excitement, the Aries person will look for new ones to pursuit.

Aries is a fascinating constellation, so the next time you are gazing into the night sky, be sure to search out this intriguing figuration of stars.