Hamal is Arabic for “head of the ram” and is also called Alpha Arietis. It’s approximately 15 times the diameter of the Sun but burns cooler than the Sun which is why it has an orangish hue to it. In additional, in 2011 Hamal was discovered to have a planet about 1.8 times the size of Jupiter in its orbit.

Hamal is located in the constellation of Aries and lies approximately 66 light-years in distance. Along with its brother stars (Sheratan and Mesarthim) Hamal makes up the head of the ram in its home constellation.

Observers will be happy to know this star is visible to the naked eye. If you are in the mid-northern latitudes, Hamal is best viewed in the eastern sky in the fall evening. In the southern sky, Alpha Arietis is high in the winter months and appears in the west in early spring. Once April rolls around, Hamal disappears from sight then returns to the eastern skies before sunrise from spring to early summer. 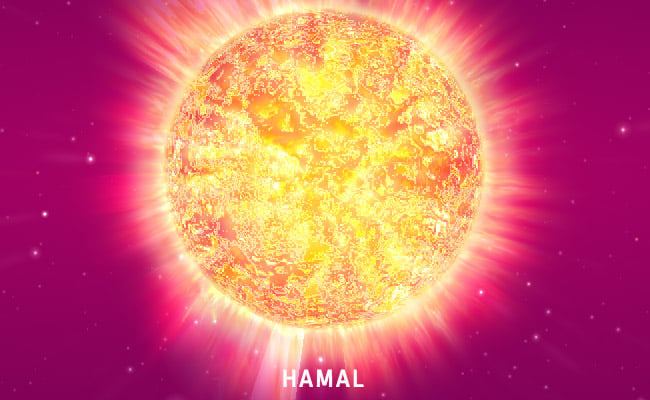 Hamal is a K-type orange giant star approximately twice as massive as the Sun and 15 times its diameter. Studies show that Alpha Arietis has exhausted its hydrogen supply found at its core, making it an evolved giant star on its way to being a red giant. This star also burns cooler than the Sun, which is why it appears to have that orange-hue glow to it. In additional, in 2011 Hamal was discovered to have a planet about 1.8 times the size of Jupiter in its orbit.

This star is the brightest one in the constellation of Aries and the 48th overall brightest in the night sky. Hamal has a slight variation in it luminosity with a visual apparent magnitude from 1.98 to 2.04, making it 91 percent the Sun’s luminosity. Since 1943, the spectrum of Alpha Arietis has served as a stable point by which all stars are measured and classified.

Historically, in the northern hemisphere between 2,000 and 100 BC Hamal was at the point that marks the spring or the vernal equinox. If you could have observed Hamal in the daytime back then, It would’ve been in conjunction with the Sun on or about April 24th. This held a significance to our ancestors who depended on the land and seasonal changes. Today, the Sun shines in front of Pisces during the March equinox due to its moving one degree (about two Sun diameters) every 72 years. There is no mythology associated with Alpha Arietis separate from the Aries constellation.

Hamal is not just another twinkling celestial object, it has some cold hard facts and true significance. So if you have a chance to view the brightest star in the Aries constellation be sure to take a peek at one of the most intriguing views you may ever experience.

Part 1: We answer questions about the notorious Webb telescope

The birth of an idea and the existence of extrasolar planets

Have you ever seen a false Sun?