Beta Andromedae has a traditional name of Mirach which is derived loosely from the Arabic language (mizar) meaning ‘girdle’. This refers to the placement of the star on the left hip of Andromeda, in which it makes up part of an asterism in this constellation. It also shines approximately 1,900 times that of the Sun.

Mirach (Beta Andromedae) is located approximately 200 light-years away in the constellation of Andromeda. It is the 19th constellation in size out of the eighty-eight and has three Messiers and one meteor shower (the Bielids) which occurs around mid-November each year. Andromeda also belongs to the Perseus family of constellations.

This star can be seen in its home constellation located in the first quadrant of the Northern hemisphere, specifically between latitudes of +90 and -40 degrees. Because this star is bright it can be viewed by the naked eye from all locations 54 degrees south. When searching for Mirach in the night sky, look to the northeast from the Great Square of Pegasus. Along with Beta Andromedae you may also catch a glimpse of NGC 404 a lenticular galaxy also known as Mirach’s Ghost. However, due to the light from Mirach this galaxy may be hard to spot even with a telescope. 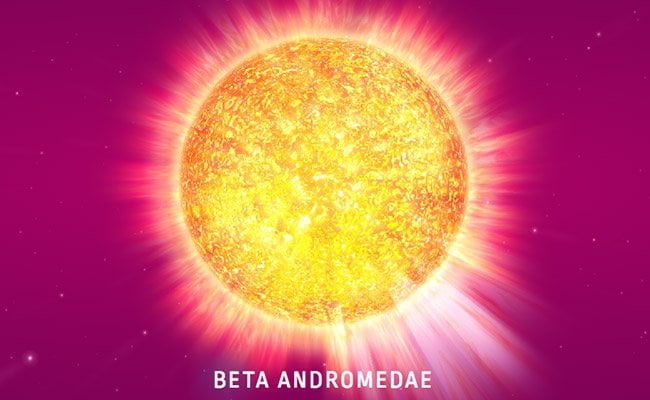 This star is a cool, bright red class-M giant that is three to four times more massive than the Sun. Mirach has also expanded to around 100 times that of the Sun. Its stellar classification is M0III and has served as an anchor point by which other stars are measured. In addition, Mirach appears to have a hydrogen fusing magnitude 14 companion star in its orbit.

Because Beta Andromedae is classified as a suspected semi-regular variable star, its range in apparent magnitude is from +2.01 to +2.10. It shines approximately 1,900 times that of the Sun and has an effective temperature of 3,842 Kelvins or 6,455 degrees Fahrenheit (3,568 degrees Celsius).

This star has some historically significance. In ancient Arabic it was called Janb al-Musalsalah meaning, “the side of the chained (lady).” This may originate from Greek mythology where a princess named Andromeda was chained up and left by her parents as a sacrifice to the sea monster for her mother’s boastfulness.

Beta Andromedae is not just another twinkling celestial object, it has some cold hard facts and true significance. So if you have a chance to view part of the “chained lady” be sure to check it out.

Fly to Beta Andromedae in 3D!