Bellatrix is about 20 million years-old and is thought to have six times the radius of the Sun and eight or nine solar masses. Bellatrix also has a bluish-hue and shines the 3rd brightest in its home constellation and 27th overall in the night sky. Bellatrix is also one of the four stars that are used in celestial navigation.

Bellatrix is located approximately 240 light-years away in the constellation of Orion. It is the 26th constellation in size out of the eighty-eight and has many nebulae, clusters and the famous Orion’s Belt asterism associated with it.

This star can be seen in its home constellation located in the first quadrant of the Northern hemisphere, specifically between latitudes of +85 and -75 degrees. Because this star is very bright it can be viewed by the naked eye. Bellatrix represents Orion’s right shoulder so look here to view this heavenly wonder. in addition, this star along with Betelgeuse, Rigel and Saiph make up the recognizable rectangle of Orion. 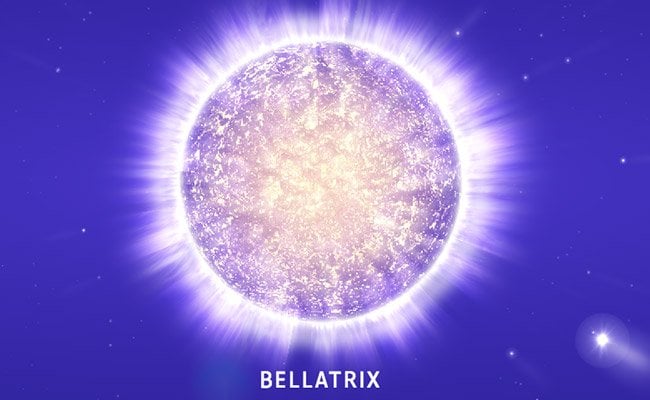 Bellatrix is an old star (approximately 20 million years) that has gone through all its core hydrogen moving it from the main sequence into the hot-blue giant star phase of its existence. It is thought to have six times the radius of the Sun and eight or nine solar masses. Due to the current properties of Bellatrix, this star is on its way (in a few million years) to becoming an orange giant, then eventually a huge white dwarf.

This star shines the 3rd brightest in its home constellation and 27th overall in the night sky. It has 6,400 times more light than the Sun and shines with a mean apparent visual magnitude of 1.64. However, this star does vary slightly in its brightness starting at an apparent magnitude of 1.59. Bellatrix also gets that blueish-hue due to the effective temperature of its outer shell, which is 22,000 Kelvins or 39,140 degrees Fahrenheit (21,726 degrees Celsius).

This star has some historically significant and was first mentioned in the works of John of Seville and Abu Ma’shar al-Balkhi. The name originally referred to Capella, but was changed to Gamma Orionis in the 15th century by the Vienna school of astronomers. It also made an appearance in the contemporary reprints of the Alfonsine tables. The name Amazon Star is suggested by Richard Hinckley Allen to have come from Arabic (Al Najid) and loosely translates to “the Conqueror.” In addition, Bellatrix is also one of the four navigational stars that are used in celestial navigation.

Bellatrix is not just another twinkling celestial object, it has some cold hard facts and true significance. So if you have a chance to view this “female warrior” star be sure to check it out.

Fly to Bellatrix in 3D!