Alpha Ursae Majoris has a traditional name, Dubhe, which is derived from Arabic (Dubb) meaning ‘the bear’. This star can be found in the constellation of Ursa Major and is located on the top tip of the Big Dipper’s bowl. It has four times the mass of the Sun and 16 times its diameter. It is also considered a spectroscopic binary.

Dubhe (Alpha Ursae Majoris) is located approximately 123 light-years from Earth in the constellation of Ursa Major. It is the 3rd largest constellation in the heavens and is most notable for being the home to the Big Dipper. It also contains several Messiers and two meteor showers (Alpha Ursa Majorids and Leonids-Ursids).

Alpha Ursae Majoris can be seen in its home constellation located in the second quadrant of the northern hemisphere, specifically between latitudes of +90 and -30 degrees. One of the great things about this star is it can be viewed by the naked eye and is the star located on the top tip of the Big Dipper’s bowl. Plus, Dubhe is actually the northern of the “pointer” stars to Polaris (the North Star). 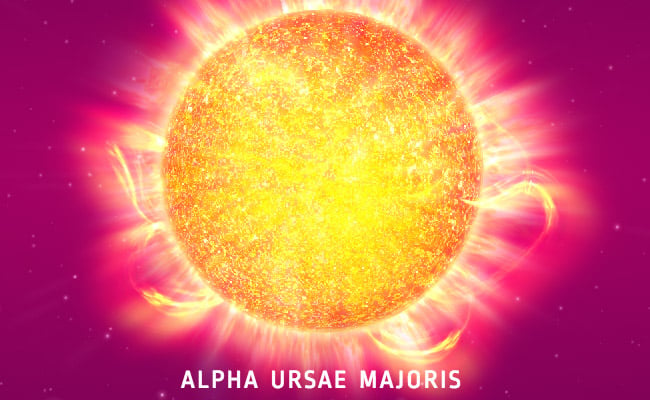 Dubhe is a giant star that has burned through the hydrogen at its core and has now evolved away from the main sequence. It has four times the mass of the Sun and 16 times its diameter. It is also considered a spectroscopic binary. The companion is classified as a main sequence star with a stellar classification of K0V. It completes an orbit around the primary every 44.4 years and is estimated to be about 1.7 times the mass of the Sun and 1.3 times it diameter. In addition, there is also another binary system with an F-type star making Dubhe a four-star system.

This star is the second brightest in its home constellation with 300 times the luminosity of the Sun. Alpha Ursae Majoris has an apparent visual magnitude of 1.79. In addition, this star is burning at an effective temperature of 4,500 Kelvins (7,640 degrees Fahrenheit or 4,282 degrees Celsius) which is what gives it that orange color.

Although, there is no mythology specifically associated with Alpha Ursae Majoris, the constellation is one of the oldest and most culturally significant. It has been referenced in the Bible, Homer and a vast number of tales, legends and stories. Hindus believe the seven brightest stars of Ursa Major represent the Seven Sages, while some Native culture believe the bowl of the Big Dipper is the bear and the handle are the hunters chasing it.

Alpha Ursae Majoris / Dubhe is not just another twinkling celestial object, it has some cold hard facts and true significance. So if you have a chance to view this star of “the Big Dipper’s bowl” in the night sky be sure to check it out.