Barnard’s Star was named after the astronomer E.E. Barnard. This 7 to 12 billion year-old star may be one of the oldest ones in the Milky Way. It’s traveling closer to the Sun and will be nearest in the year of 11,800. Astronomer Peter van de Kamp reported it had up to three planets in its orbit, but this turned out to be wrong. 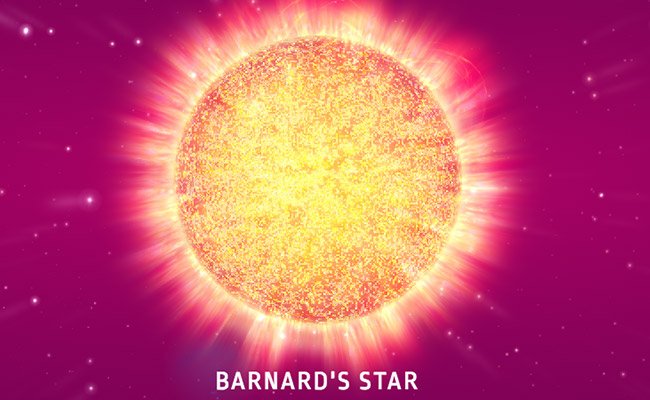 Barnard’s Star can be seen in its home constellation located in the third quadrant of the Southern hemisphere, specifically between latitudes of +80 and -80 degrees. However, to view this particular you will need the aid of a telescope and a fairly clear sky.

This 7 to 12 billion year-old star is considered to be a red dwarf and may even be one of the oldest stars in the Milky Way. It is traveling closer to the Sun and will be nearest in the year of 11,800 when it will be only 3.75 light-years away. In addition, this fascinating star has 14 percent solar mass and up to 20 percent the radius of the Sun. In 1998, Barnard’s Star was exhibiting intense solar flares which earned it the classification of a flare star.

The brightness of this star is only 1/27th of the dimmest star which can be seen with the naked eye, giving Barnard’s Star a visual magnitude of only 9.54. Barnard’s Star is also a slow rotator, completing an orbit on its own axis once every 130 days, giving it periodic changes in its luminosity range.

For years, Barnard’s Star has been the target of studies. From 1963 to 1973, claims made by an astronomer, Peter van de Kamp, reported that Barnard’s Star had up to three planets in its orbit. However, later studies showed this was false and there cannot be planets within Barnard’s Star due to its physical properties. Although, there is no mythology specifically associated with this star, its home constellation was first catalogued in the 2nd century by the Greek astronomer known as Ptolemy.

Barnard’s Star is not just another twinkling celestial object, it has some cold hard facts and true significance. So if you have a chance to view this star in Ophiuchus be sure to check it out.

Fly to Barnard’s Star in 3D!