Auriga is the 21st biggest constellation in size and covers 657 square degrees. It can be viewed in the first quadrant of the Northern hemisphere and lies specifically at latitudes between +90° and -40°. Like some of the other constellations, in the 2nd century Auriga was first catalogued by Ptolemy, who was a Greek astronomer.

Auriga’s major stars form a pattern similar to the pointed helmet worn by a charioteer and for this reason it gets its name from the Latin meaning for charioteer. Auriga neighbors with the constellations of Camelopardalis, Gemini, Lynx, Perseus and Taurus. In addition, it is also the point in the night sky that lies opposite of the Milky Way galaxy center. 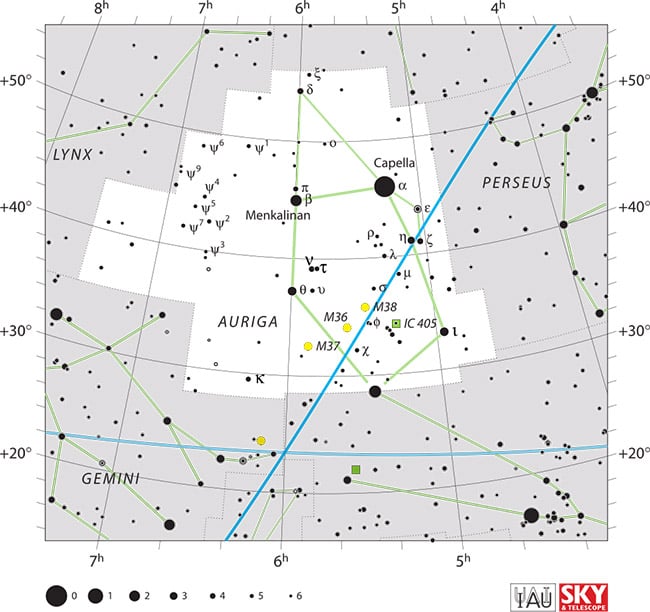 Auriga is home to five fascinating deep sky objects including three Messiers and two nebula. Check them out; 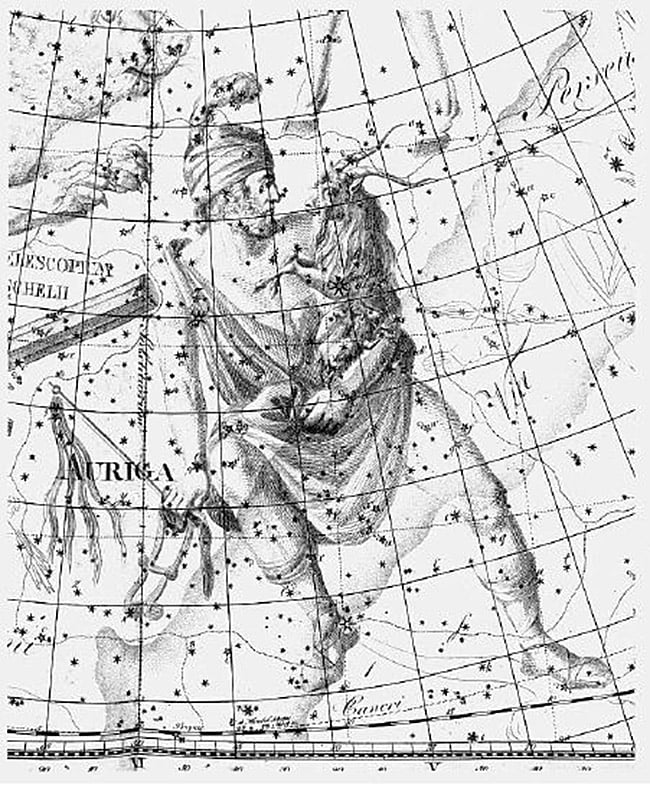 Auriga carrying the goat and kids, seen on Chart V of the Uranographia of
Johann Bode (1801)

Out of all the stars that make up the Auriga constellation none shine brighter than Capella. In fact, it is the sixth brightest star in the night sky. It is made up of two binary star pairs; two bright G-type giants and two cool red dwarfs. Capella symbolizes the Charioteer’s left shoulder or the goat he is carrying and also the goat that suckled Zeus (Amalthea).

Auriga is steeped in mythology and although they do differ in the stories, the one common denominator throughout them all is the Charioteer. It’s odd that the constellation of Auriga is shown with a Charioteer holding the reins of the chariot in one hand and a goat and its kids in the other; however, none of the myths involve goats.

The most common legend is associated with the King of Athens (Erichthonius) who was the son of the fire god Hephaestus. He was taught many skills by the goddess Athena and was credited for being the first man to train four horses to pull a chariot.

Another myth revolves around the lame god, Hephaestus. He was thought to have built a chariot so he could travel wherever and whenever he wanted.

Auriga is a fascinating constellation, so the next time you are gazing into the night sky be sure to search out this intriguing figuration of stars.