Alpha Herculis has been given an ‘Alpha’ designation; however, it’s not the brightest star in its home constellation, it’s actually 129th brightest in the night sky. Its traditional name of Rasalgethi is derived from an Arabic phrase meaning, ‘the head of the Kneeler’. The ‘head’ comes from ancient times when the constellation was shown upside down on star maps.

Alpha Herculis is located approximately 360 light-years from Earth in the constellation of Hercules. In this area there is one meteor shower that naturally occurs named, Tau Herculids. This constellation represents the Roman hero of Hercules and is the fifth largest constellation in the night sky.

Rasalgethi can be seen with the naked eye and is situated in its home constellation in the third quadrant of the Northern hemisphere, between latitudes of +90 and -50 degrees. When viewed through a telescope, Alpha Herculis is actually two components; however they are separated by five times the distance from Earth to the Sun. 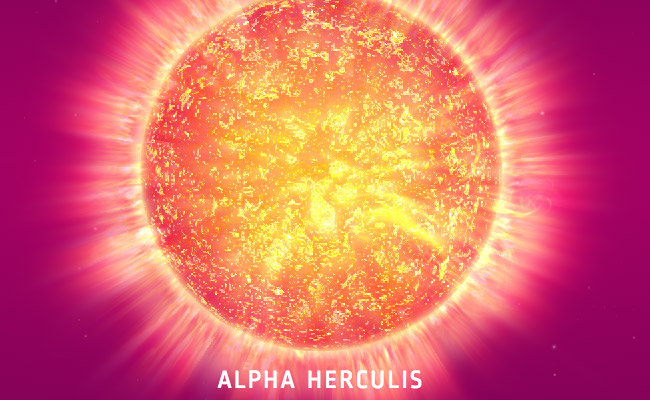 The primary star in this system is catalogued as a bright red giant and also a semi-regular variable. It is estimated to have 7 to 8 solar masses and is called, Alpha-1 Herculis. In addition, this huge red giant is reaching the end of its life-cycle and therefore is experiencing an increase in stellar mass loss. The second component (Alpha-2 Herculis) is a binary star composed of a yellow giant and a yellow-white dwarf. Alpha-1 and Alpha-2 are separated by 500 astronomical units and complete a rotation around one another about every 3,600 years.

Although, Rasalgethi has been given the designation of “Alpha” it is not the brightest star in the Hercules constellation (that would be Kornephoros). This red giant has an apparent visual magnitude of 2.78 and is actually the 129th brightest in the night sky. However, it will get more luminous as it draws closer to the Sun in about 2 million-years. When this happens it will increase to an apparent magnitude of 1.75 and will be only 218 light-years away. Alpha-2 Herculis shines with an apparent visual magnitude of 5.4.

Rasalgethi was discovered to be a semiregular variable star in 1795 by Sir William Herschel. As we mentioned earlier, its traditional name is derived from an Arabic phrase (ra’s al-jaoiyy) meaning, “the head of the Kneeler.” The “head” comes from ancient times when the constellation was shown upside down on star maps. The star’s Latin name translated from Arabic is, Caput Ingeniculi.

Alpha Herculis is not just another twinkling celestial object, it has some cold hard facts and true significance. So if you have a chance to view this natural wonder in the Hercules constellation be sure to check it out.

Fly to Alpha Herculis in 3D!