Deneb is from the Latin language meaning ‘tail’, and is one of the largest white stars known today. It is also called Alpha Cygni and is a blue-white supergiant with 20 solar masses and 200 times the radius of the Sun. After a few million years Deneb’s core will collapse producing a supernova. In Chinese mythology Deneb is the bridge of magpies a Princess crosses.

Deneb is located around 2,600 light-years away in the constellation of Cygnus (the swan). This constellation is the 16th in size (out of the 88) and is home to two Messier, two meteor showers and the famous Northern Cross asterism. It also occupies about 804 square degrees in the night sky and belongs to the Hercules family of constellations.

This star can be seen in its home constellation located in the fourth quadrant of the Northern hemisphere, specifically between latitudes of +90 and -40 degrees. Because this star is so bright it can be viewed by the unaided eye and is in fact one of the furthest stars that can be seen without a telescope. When searching for Deneb there are three distinct places to locate this bright beauty. Deneb is the brightest star in “the Swan” marking the point on its hind end where the feathers begin to grow. It marks the top (or head) of the Northern Cross and also one of the three stars in the Summer Triangle. The best time to view Deneb in the northeastern horizon is mid-evening starting in the spring months. Once the month of August rolls around, Deneb is high in the night sky and ready for full viewing. 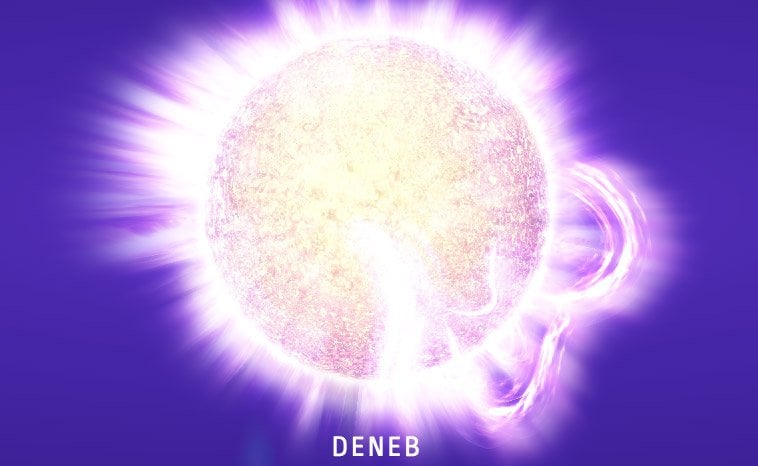 Alpha Cygni is a blue-white supergiant with 20 solar masses and 200 times the radius of the Sun. Deneb is one of the largest white stars known today. This star is also in the process of changing as it has exhausted all the hydrogen at its core and is currently expanding. This will eventually evolve Deneb into a very luminous red supergiant and after a few million years its core will collapse producing a supernova. It also may also have a single line spectroscopic binary star in its system; however, further studies need to be done to confirm this theory.

Deneb is the brightest star in the Cygnus constellation and the 19th overall in the night sky. It shines with an apparent visual magnitude of 1.25 and an absolute magnitude of -8.4 making it approximately 200,000 times more luminous than the Sun. Alpha Cygni is burning with a surface temperature of 8,500 Kelvins or 14,840 degrees Fahrenheit (8,226 degrees Celsius). The spectral type of Alpha Cygni is A2la. It serves as a prototype of other stars in this range known as the Alpha Cygni variables.

Historically, Deneb’s Arabic name is derived from the phrase Al Dhanab al Dajajah meaning, “Tail of the Hen.” This dates back to the first interpretation of this constellation as a chicken rather than a swan. It also has been referred to as Uropygium (according to Richard Hinkley Allen) which means the hind end of the bird where the feathers grow or in modern day terms, “the Pope’s Nose.” In Chinese mythology Deneb represents the bridge of magpies that the Princess (the star Vega) crosses once a year to visit her beloved cowherd (the star Altair).

Deneb is not just another twinkling celestial object, it has some cold hard facts and true significance. So if you have a chance to view this fascinating star of “the tail of the bird” be sure to check it out.