Canes Venatici is derived from the Latin language and means “hunting dogs,” representing the hunting dogs of the herdsman in the Bootes constellation. It can be found in the third quadrant of the Northern hemisphere and is located specifically between latitudes of +90° and -40°. This constellation is also home to the famous Cor Caroli and La Superba stars. 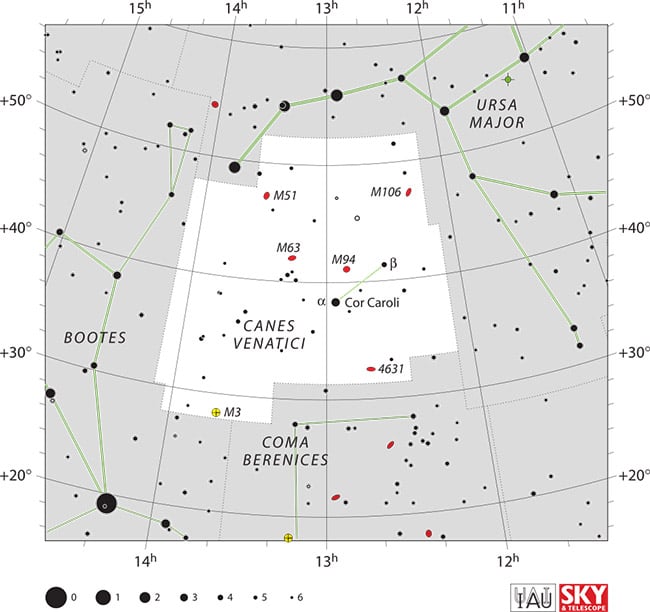 Canes Venatici has fourteen deep sky objects. Read on to discover some fascinating facts about the more notable of these celestial wonders. 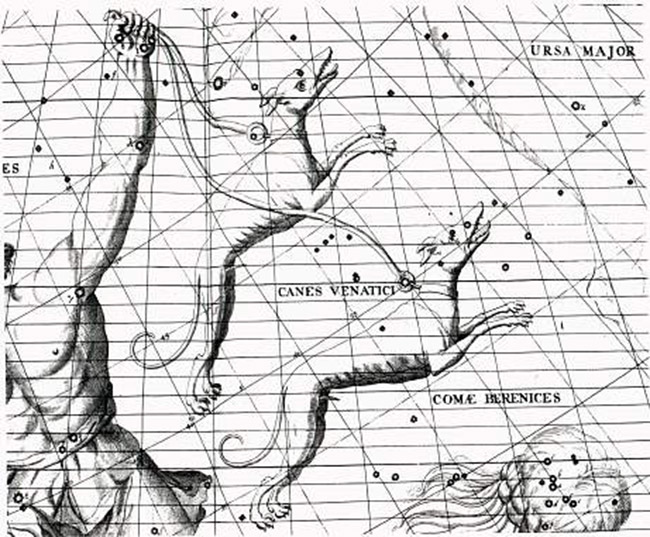 Canes Venatici, two hunting dogs held on a leash by Boötes, seen in the Atlas Coelestis of John Flamsteed (1729)

Out of all the stars that make up the Canes Venatici constellation, none shine brighter than Cor Caroli. Its name means “Charles’ Heart,” named in honor of Charles I (the King executed after the British Civil War). This binary star is composed of a brighter component that is laden in europium, mercury and silicon. The lesser component is a F-type main sequence star. Cor Caroli is located about 110 light-years away.

The history of Canes Venatici can be traced back to the Middle Ages where there was a mistake in its translated name. In this time period, the constellation was symbolized as the two dogs the herdsman (Bootes) held on a leash and in his other hand he held a club. Some of the stars did belong in the herdsman’s club; however, when Ptolemy’s Almagest was translated into Latin the word for dogs (kilab) was mistaken for the word meaning” the spearhead with hooks” (al-`aşā dhāt al-kullāb). In the 17th century, the dog’s were defined in the night sky by Hevelius. He named the Northern dog Asterion, which in Greek means “little star” and the Southern one was called Chara for “joy.”

Canes Venatici is a fascinating constellation, so the next time you are gazing into the night sky, be sure to search out this intriguing figuration of stars.