Cancer means “the crab” in Latin and is the faintest of the 12 zodiac signs. It can be found in the second quadrant of the Northern hemisphere and is located specifically between latitudes of +90° and -60°. Like all the Zodiac signs, Cancer was first catalogued in the 2nd century by Ptolemy, who was a Greek astronomer.

Cancer takes on the form of an upside down “Y” shape. It is the 31st largest constellation in the night sky, occupying 506 square degrees. Cancer is also neighbors with Canis Minor, Gemini, Hydra, Leo, Leo Minor and Lynx. In addition, this constellation has eight stars, two Messiers and one meteor shower (Delta Cancridae) associated with it. 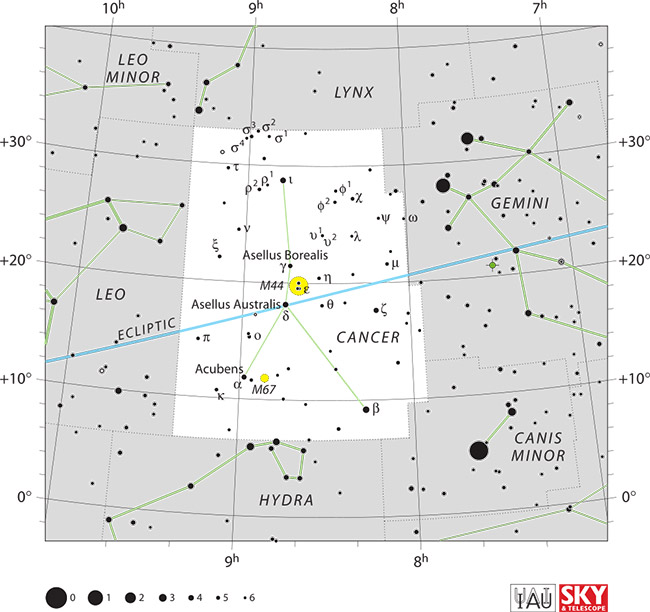 Cancer has six deep sky objects. Read on to discover some fascinating facts about these celestial wonders.

The constellation Cancer contains eight main stars that makes up its shape. Let’s explore them further. 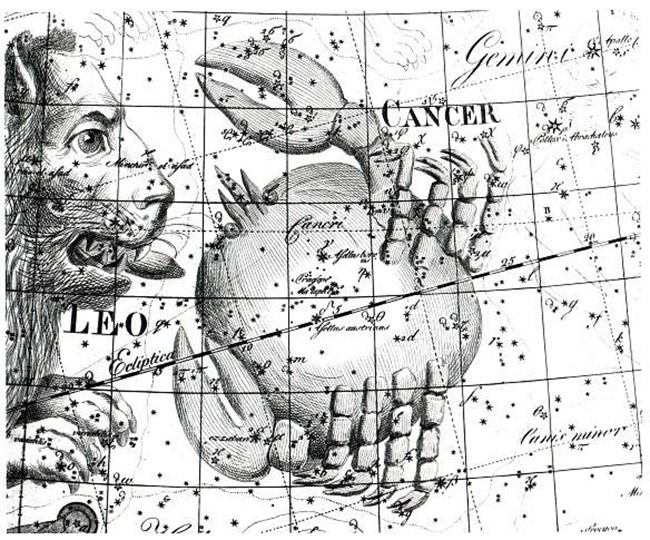 Out of all the stars that make up the Cancer constellation, none shine brighter than Al Tarf. Its name is derived from the Arabic (at-tarf) meaning “eye” or at-tarfah, meaning “the glance (of Leo”). This binary star has an orange K-type giant as its main component and is 290 light-years away.

One of the legends of the Cancer constellation pertains to Hercules and his Twelve Labors. As the story goes, a crab was sent to Hercules, by Hera (sworn enemy) to distract him in the battle with the Lernaean Hydra – a many-headed serpent-like creature with poisonous breath. As the crab tries to kill Hercules, he kicks it with all his strength, sending it into the stars.

In another version of the myth, the crab is crushed while trying to kill Hercules, so Hera places it into the sky to commemorate its efforts; however, she places it in a dark region because it was unsuccessful in its task.

Cancer is the fourth sign of the zodiac. People born between June 22nd and July 22nd are in this sign of the crab. Some characteristics of people born under this sign are;

Cancers do tend to be a bit moody, oversensitive and clingy. They have the ability to be very independant; however, if they aren’t fully self-actualized they will constantly be looking for the help of others. This sign craves the attention and comfort from people and for this reason are happiest with a small, but close-knit group of friends. Cancers may be a bit insecure at times, but once they resolve this issue, there is nothing they can’t do.

Cancer is a fascinating constellation, so the next time you are gazing into the night sky, be sure to search out this intriguing figuration of stars.