Arcturus is derived from the ancient Greek language meaning ‘guardian of the bear’, because of its proximity to Ursa Major and Ursa Minor. Romans spoke of Arcturus as the narrator of the prologue, Rudens. Arab culture refers to this star as Al Simak al Ramih meaning ‘Leg of the Lance-bearer’, and in Chinese this star is called Ta-Kio or ‘the Great Horn’.

Arcturus is located approximately 36.2 light-years away in the constellation of Bootes. It is the 13th constellation in size out of the eighty-eight and has three meteor showers associated with it; the January Bootids, the June Bootids and Quadrantids. This constellation also belongs to the Ursa Major Family of constellations. 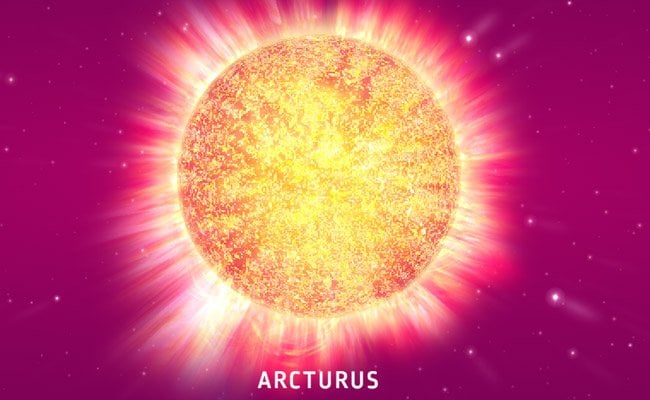 Alpha Bootis can be seen in its home constellation located in the third quadrant of the Northern hemisphere, specifically between latitudes of +90 and -50 degrees. Because this star is very bright and is situated 19 degrees north of the celestial equator, it can be viewed by the naked eye from most locations around the world. The easiest way to find Arcturus is by following the arc of the handle of the Big Dipper. It is located in the left foot of Herdsman. The best time to view this star is from midnight on April 27th and again at 9 PM on June 10th; however, it is also visible during the late northern spring or the southern fall.

Arcturus is a K1.5 IIIpe (peculiar emission) orange giant that is showing an unusual spectrum of light and is full of emission lines. This star has gone through all the hydrogen at its core and is now burning up its outer shell, soon Alpha Bootis will enter the horizontal branch phase of its life. In addition, this star has a high rate of proper motion (122 kilometers/second or 75 miles/second) relative to the solar system, which means it will come its closest to the Sun in about 4,000 years.

Arcturus is the brightest star in its home constellation, the third brightest in the night sky and the brightest one in the northern hemisphere. It shines 110 times more luminous than the Sun with an apparent visual magnitude of -0.04.

This star holds significance for many cultures. Check it out;

Bootes was first catalogued in the 2nd century by the Greek astronomer known as Ptolemy.

Alpha Bootis is not just another twinkling celestial object, it has some cold hard facts and true significance. So if you have a chance to view this “guardian of the bear” be sure to check it out.

Fly to Arcturus in 3D!