Solar storms can cause Earth’s atmosphere to swell, making it difficult for satellite communication. Scientists have an observatory to study the sun and warn us about solar flares. Read on to learn about this observatory.

During the week of of July 5th thru the 11th, NASA captured a series of large sunspots on the eastern limb of the sun. Two days featured a spotless sun, while the new sunspot area emerged on July 6th. NASA named this area AR2665. It doubled in size in 24 hours and stretched 125,000 km from end to end. To put it in perspective, it almost reached the width of Jupiter. Although they appear as dark holes, sunspots consist of tight bundles of strong magnetic fields, slightly cooler than surrounding areas.

In 1995 NASA launched SOHO. The Solar and Heliospheric Observatory (SOHO), a satellite that keeps an eye on the sun’s activity, provides scientists with information regarding solar flares.  It’s a joint mission between NASA and the European Space Agency.

The SOHO has more than answered those questions and provided more information. In 2001, SOHO researchers gave storm watchers an extra week’s notice of eruption risks. How could it do that? One of the spacecrafts instruments can see through the sun to the backside. Another one can sense activity through ultraviolet emissions.

Researchers reported several discovers made from SOHO. They saw the sun get brighter as sunspot activity increased. They watched gas currents whisk below the sun’s surface and analyzed the elements coming out of the “solar wind”.  One of the most important discovers involved the coronal mass ejections. These large amounts of ionized gas form a “highway” that sends energetic particles through space. The ability to protect our astronauts and infrastructure relies on this information. Due to its 20 year observation period, scientists have improved the accuracy of space weather forecasts. 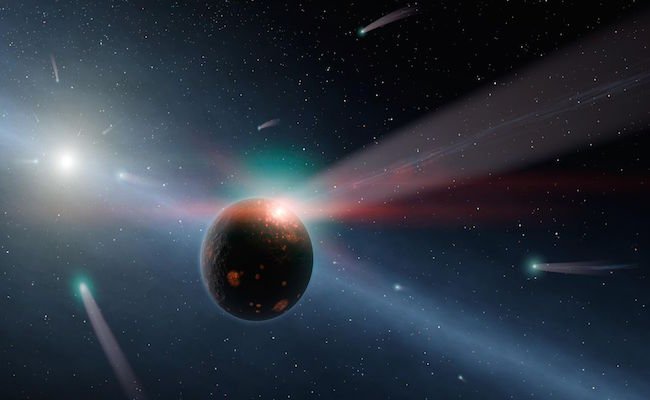 One of the side benefits from SOHO relates to comet watching.The LASCO coronagraph on SOHO, designed for seeing outbursts from the Sun, uses a mask to block the bright rays from the visible surface. It monitors a large volume of surrounding space and, as a result, has become the most prolific ‘discoverer’ of comets in the history of astronomy. Many comets head toward the sun. As a tool for comet hunters, SOHO observed its 3000th comet in September of 2015. Most of the observations involved amateur comet hunters.

Although SOHO provides large amounts of information to scientists, they would like to launch another craft to explore an area that SOHO cannot see. Working with the Europeans, NASA will someday launch another observatory, helping to fill in the gaps from the current SOHO. Advancing our understanding of sunspots and solar flares may help prevent a large scale disaster around our electronics and navigation devices. With more data from space, scientists here can develop systems impervious to the Sun’s damages to electrical infrastructures as well. For more information on watching for comets check out the Sungrazer project here.