NASA has developed a new meteor impact tracking system called ATLAS. Read on to learn more about this new system.

Meteor impacts concern scientists and astronomers due to their ability to wreak havoc on Earth. In response to these concerns, NASA has created the Asteroid Terrestrial-Impact Last Alert System (ATLAS). Currently, two telescopes on the Hawaiian islands work to locate incoming asteroids. NASA plans to add more telescopes in the coming years. The project involves two phases. The first phase requires the telescopes to warn scientists of asteroid impacts. The second phase needs to have something to destroy the asteroid before it hits Earth.

ATLAS is a robotics program that scans the night sky every 48 hours looking for near-Earth objects. These objects could impact Earth in a matter of a few days or a few weeks. NASA plans to have eight 50-centimeter diameter f/2 Wright Schmidt telescopes spread over Earth. Two telescopes began their operation in 2017 in Hawaii. Two more are scheduled for Chile in the southern hemisphere. Each telescope surveys one-quarter of the whole observable sky four times per clear night. According to researchers, these telescopes are essential.

As long as their origination does not start too close to the Sun, the automated system provides a one-week warning for a 45 meters (150 ft) diameter asteroid and a three-week warning for a 120 m (390 ft) one. Would the system have detected the 2013 Chelyabinsk meteor? Probably not, since it originated to close to the sun and the ATLAS system would have missed it. However, ATLAS would have detected a similar object coming from a darker direction. 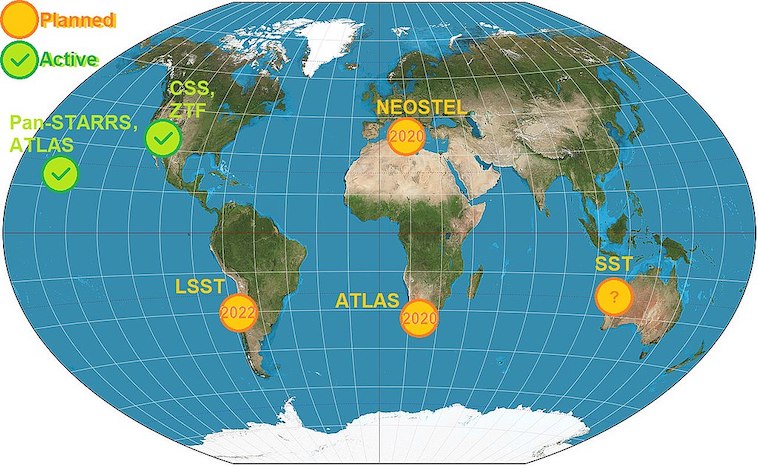 Researchers from the B612 foundation state: “It’s a 100% certainty a devastating asteroid will hit us, but we are not 100% sure when.” Statements like these appear throughout the space science community. Cataloging of large asteroids, those with diameters bigger than 1 km, started in 2005. Scientists believe they have cataloged about 97% of those asteroids. Many of these asteroids do not have the potential to hit Earth for decades or centuries.

Code-named 2019MO, the object exploded over the Caribbean near the island of Puerto Rico on June 22, 2019, with the violence of 4,000 tonnes of TNT. All the debris is thought to have plunged into the sea, but weather satellites monitoring the area witnessed the blast high in the atmosphere. Astronomers believe 2019MO originated in the asteroid belt.

The last alert phase of the program cannot deflect incoming asteroids. However, it does offer a chance for people to evacuate possible impact sites. According to ATLAS’s John Tonry, “that’s enough time to evacuate the are of people, takes measures to protect buildings and other infrastructure, and alert a tsunami danger generated by ocean impacts.”

However, researchers have planned the Asteroid Impact and Deflection Assessment (AIDA) mission. This mission involves firing a 500kg probe into a small asteroid to see whether it’s possible to nudge dangerous objects away from the Earth.

The ATLAS system provides an early warning system for the asteroids that it can detect. As technology increases this system and others will benefit people greatly. The next step, figuring out if they can blast these asteroids away from Earth. We wish them luck!!