NASA’s Curiosity rover has conducted a wet chemistry experiment. Read on to learn more about this amazing science experiment.

NASA’s Curiosity rover has come a long way since touching down on Mars seven years ago. NASA designed Curiosity to assess whether Mars ever had an environment able to support small life forms called microbes. It has traveled a total of 13 miles (21 kilometers) and ascended 1,207 feet (368 meters) to its current location. Along the way, Curiosity discovered Mars had the conditions to support microbial life in the ancient past. Since August 2019, it has slowly ascended Mount Sharp inside of Gale Crater.

Scientists believe that billions of years ago, there were streams and lakes within the crater. Water altered the sediment deposited within the lakes, leaving behind lots of clay minerals in the region. NASA wants to whether or not Mount Sharp has clay deposits with microbial. 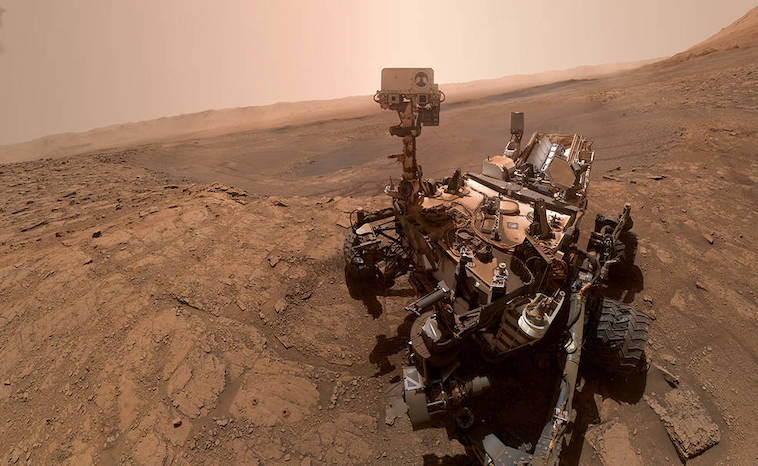 During the month of September, Curiosity drilled two small holes into the Martian surface. The rover can analyze the chemical composition of rock samples by powdering them with the drill. Next, it drops the samples into a portable lab in its belly called Sample Analysis at Mars (SAM).

The unique chemistry experiment occurred on Sept. 24, 2019, after the rover placed the powdered sample from Glen Etive 2 into SAM. The portable lab contains 74 small cups used for testing samples. Most of the cups function as miniature ovens that heat the samples. Next, SAM “sniffs” the gases that bake-off, looking for chemicals that hold clues about the Martian environment billions of years ago. This was at a time when scientists believe the planet was friendlier to microbial life. (NASA, 2019)

Nine of SAM’s 74 cups are filled with solvents the rover can use for special “wet chemistry” experiments. These chemicals make it easier for SAM to detect specific carbon-based molecules critical to the formation of life, called organic compounds.

The science test was not the first one conducted on Mars. However, it was the first one done with a drilled sample. In December 2016, when Curiosity’s drill malfunctioned, the rover still had a bit of sand that it had scooped up in a place called “Ogunquit Beach.” However, it wasn’t a drilled sample. As a result of the broken drill, NASA wasn’t sure whether they would get the drill working and be able to perform wet chemistry in the future. Consequently, they delivered the Ogunquit Beach sand into one of SAM’s wet chemistry cups with the hopes of gaining more information.

It will take many months for NASA to learn the results from the tests. “SAM’s data is extremely complex and takes time to interpret,” Mahaffy said. “But, we’re all eager to see what we can learn from this new location, Glen Etive.”

Scientists consider Glen Etive a strategic location that will reveal more about how the clay-bearing unit formed. Thankfully, Curiosity has a stable power source to keep it going. The rover carries a radioisotope power system that generates electricity from the heat of plutonium’s radioactive decay. Consequently, it has years ahead of it to conduct research. We shall continue to report on Curiosity’s finds.