You may have noticed how Jupiter shines these nights. It dominates the sky and if it is clear you will see it already at dusk. It is indeed the brightest object visible in the night (after the Moon, of course).

In fact, this year Jupiter is closest to us in the last seventy years, i.e. 591 million kilometers. That is why its magnitude is high and amounts to -2.9 m.

Otherwise, Jupiter enters opposition approximately every 13 months*. That’s how long it takes the Earth to go around the Sun once in relation to Jupiter. This again means that the opposition of Jupiter comes one month later every year.

The excitement of scientists about the good quality of the photos coming from the James Webb Space Telescope (JWST) is by no means abating, as the increasingly popular telescope is constantly sending new magnificent images.

This time it’s about Webb’s view of the largest planet of the solar system, Jupiter. Indeed, so much can be seen in these recordings, certainly more than scientists expected. 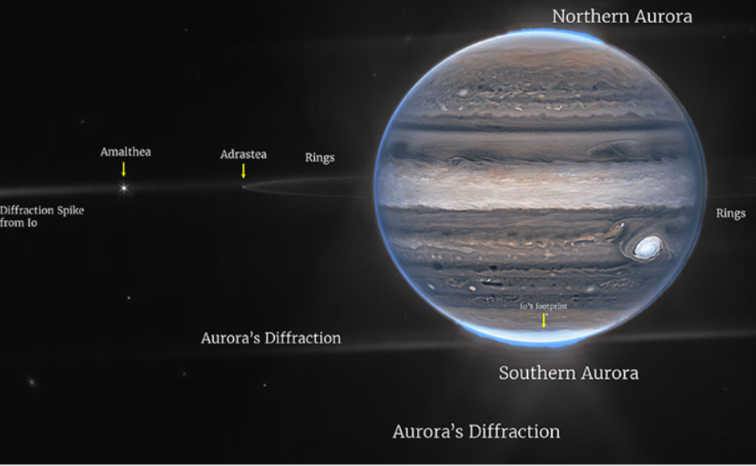 JWST photographed Jupiter with a near-infrared camera, so it recorded infrared waves, which the human eye cannot detect. Therefore, in order to see a visual record, this infrared light is converted into the visible spectrum.

This results in a wonderful, detailed photograph, but with unusual colors and certainly not the kind we are used to seeing in Jupiter images. The longest wavelengths in the photo are given a reddish tint, and the shortest wavelengths are bluish.

This is a composite image, which means that it is made up of several individual shots. We see the planet itself, but also what is truly rare: Jupiter’s ring, and then two of Jupiter’s moons: Amalthea and Adrasthea. The blue glow around Jupiter’s poles are the auroras.

Take a look at the video below.

Do you have a telescope?

At midnight, Jupiter is quite high, and that’s when it and its suite of satellites are best for observation.

If you have a telescope, pay attention to Jupiter’s stripes and, above all, to its great red spot. That red spot is a storm that has been raging for at least four centuries since it was first observed.

Jupiter turns around its axis in less than ten hours, so you have a good chance of seeing that spot, if not one night, then the next.

Oh, did you know that here at OSR you can name real stars? Brilliant, isn’t it?