We’ve all looked up at the night sky at one time or another and viewed our natural satellite, the moon. But how the moon appeared has everything to do with what phase it was in. Let’s take a look at how the moon changes it appearance during its lunar calendar.

The moon orbits Earth at about 382,400 kilometers and takes 29.53 days to cycle through its lunar month, which is why we see the moon in various phases. Just like Earth is lit only half of the time by the Sun, so is the moon. The phases we view of the moon is due to the angle it makes with the Sun when viewed from Earth. We really only see the moon because sunlight is reflecting off of this orb and reflecting it back to us. 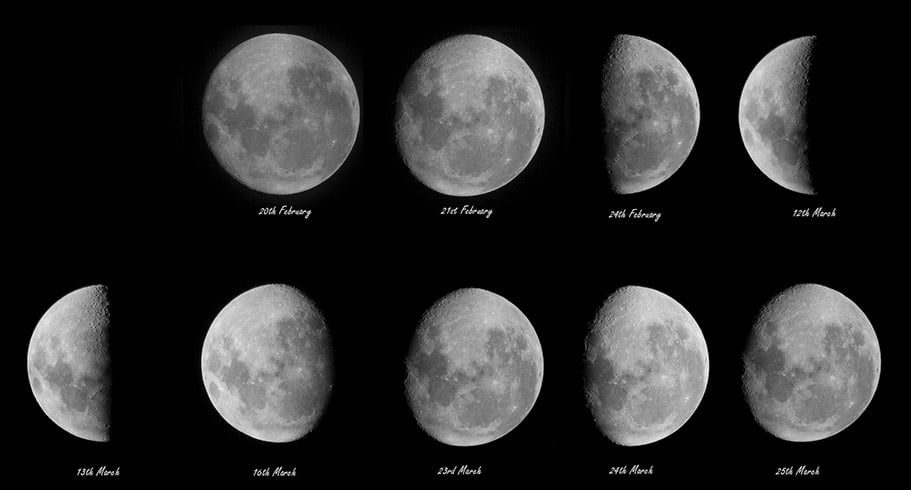 The moon has four main phases; the New Moon, the Full Moon, the First Quarter and the Third Quarter.

When the moon is in this phase, we cannot see it here from Earth. This is because the moon is positioned between the earth and sun. When they are in approximate alignment, the entire illuminated portion of the moon is on its backside, the half that we cannot see.

The striking beauty of a full moon is again due to the Earth, Sun and moon being in approximate alignment; however the moon is on the opposite side of the Earth and therefore can be fully illuminated by the Sun.

Also known as Half Moon, this is when the moon is at a 90 degree angle with respect to the Earth and Sun. So we are seeing exactly half of the moon lit up and the other half in its shadow.

Now that we know the main phases we can add in the other phases our moon shows or the in between phases of our four main ones. These are;

If you really want to impress your friend and family with your moon knowledge you can add the phases together, for example;

The phases of the moon are quite fascinating, but did you know that each month’s Full Moon has a very specific name? Check them out.

May Milk Moon or Planting Moon

If you are looking for a cool way to demonstrate the phases of the moon with your kids, check out this YouTube Video that uses a lamp, a foam ball and a pencil…very cool.

Whether we pay attention or not, the moon has been going through its phases since the dawn of time. This month be sure to take a look at the moon and note the phase it is currently cycling through. It’s fun, free and very fascinating.