Denebola is from the Arabic language meaning, ‘the lion’s tail’, which is in the constellation of Leo. In the Ancient Chinese culture, their astronomers gave Denebola the first star designation in the five-star asterism ‘Seat of the Five Emperors’. In astrology, Denebola was believed to bring misfortune and disgrace. It’s also 15 times brighter than the Sun.

Denebola is located only 36 light-years away in the constellation of Leo (the lion). This constellation is the 12th largest in size (out of the 88) and is home to a number of deep space objects including Messier galaxies. It also occupies about 947 square degrees in the night sky and belongs to the Zodiac family of constellations.

This star can be seen in its home constellation located in the second quadrant of the Northern hemisphere, specifically between latitudes of +90 and -65 degrees. Because this star is so bright it can be easily viewed by the unaided eye. When searching for Denebola look for the triangle at the back of the Leo constellation. It is the point or the top star of this shape. 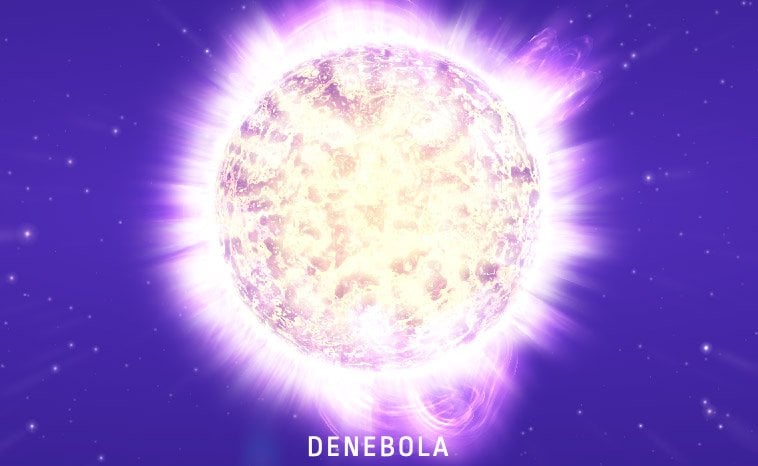 Denebola is an A-type main sequence star with 75 percent the mass of the Sun and 173 percent solar radius. It is estimated to be about 400 million years-old; however due to its high mass it will spend less time on the main sequence before it evolves. In addition, Beta Leonis is also a fast rotator (128 kilometers/second or 79.5 miles/second) giving it a large equatorial bulge and an oblate spherical-shape. Since this star is showing strong infrared excess, astronomers believe there is a circumstellar debris disk made up of cool dust in its orbit. Studies made from the Herschel Space Observatory indicate this disk to be located approximately 39 times the distance between Earth and the Sun. Denebola is also part of the IC 2391 supercluster where all the stars (more than 60) share a common motion through space even though they are not gravitationally bound to one another.

Denebola shines 15 times brighter than the Sun and is the third brightest in Leo and 61st overall in the night sky. It has an apparent visual magnitude of 2.113 and is also considered a Delta Scuti variable because of its fluctuations in magnitudes (about 0.025) which occurs about 10 times a day. Its typical white-hue is caused by the effective temperature of its outer envelope which is burning at 8,500 Kelvins or 14,840 degrees Fahrenheit (8,226 degrees Celsius).

Historically, Denebola has been listed in the Alphonsine Tables as Denebalezeth and on R. A. Proctor’s Northern hemisphere star chart (1871) as Deneb Aleet. In John Bayer’s Uranometria of 1603, this star was given the designation of the second-brightest star in Leo and John Flamsteed in 1725 designated Denebola as 94 Leo. In addition, 15th century astronomer (Ulugh Beg) called this star Al Sarfah meaning, “the Changer” in reference to the weather. While back in the 11th century a Muslim scholar wrote this about the star Beta Leonis; “The heat turns away when it rises and the cold turns away when it disappears.” In the Ancient Chinese culture, their astronomers gave Denebola the first star designation in the five-star asterism “Seat of the Five Emperors.” In astrology, Denebola was believed to bring misfortune and disgrace.

Denebola is not just another twinkling celestial object, it has some cold hard facts and true significance. So if you have a chance to view this fascinating star of “the lion’s tail” be sure to check it out.

Natal Astrology: The Elements of The Zodiac Signs

Annual horoscope 2022: This is written in the stars for you!

The date that keeps showing up in our space history

The actors closest to the spotlight – Let’s meet them

When was the last time you saw the Milky Way