Cepheus represents King Cepheus who was the husband of Cassiopeia and the father of Andromeda (who also have constellations). It lies in the fourth quadrant of the Northern hemisphere and is located specifically between latitudes of +90° and -10°. Along with other constellations, Cepheus was first catalogued in the 2nd century by, Ptolemy, a Greek astronomer.

Cepheus is the 27th largest constellation in the night sky, occupying 588 square degrees. Cepheus is also neighbors with Camelopardalis, Cassiopeia, Cygnus, Draco, Lacerta and Ursa Minor. In addition, this constellation has ten main stars and seven deep space objects, but no Messiers or meteor showers. However, it is home to the famous red supergiant named, Garnet Star. 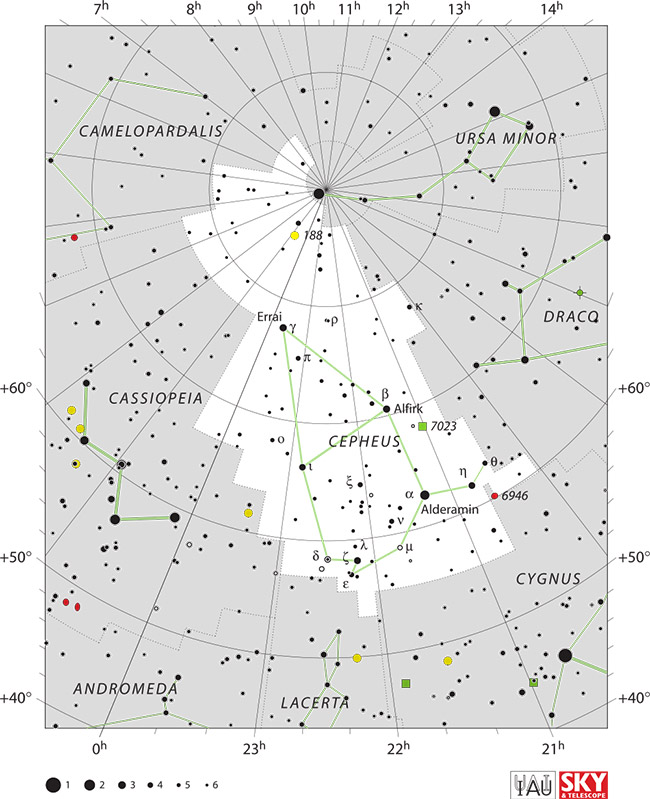 Cepheus has seven deep sky objects. Read on to discover some fascinating facts about these celestial wonders.

The constellation Cepheus contains ten main stars that makes up its shape. Let’s explore them further. 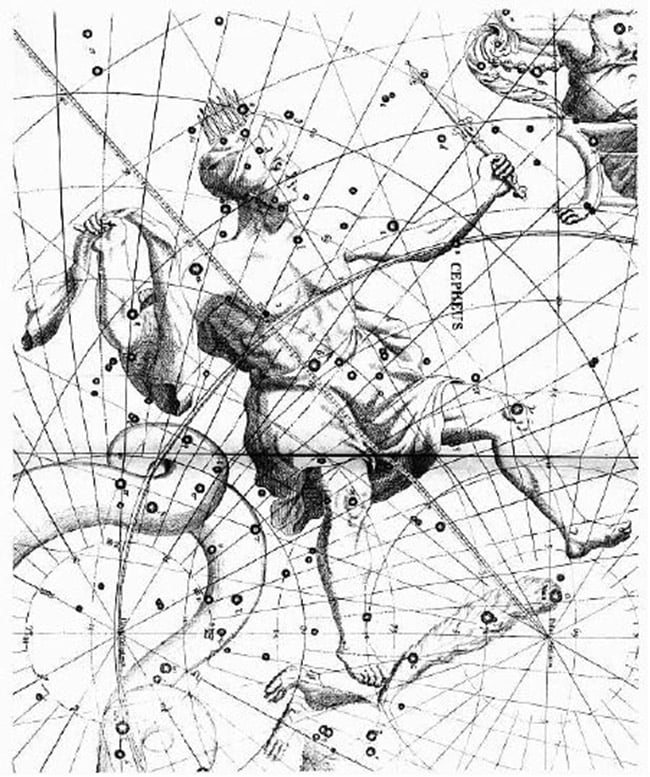 Cepheus depicted in the Atlas Coelestis of John Flamsteed (1729).

Out of all the stars that make up the Cepheus constellation, none shine brighter than Alderamin (Alpha Cephei). This white class A star is currently evolving from a main sequence star into a subgiant and never sets below the horizon. It can be seen with the naked eye from Canada, Europe, Northern Asia and most of North America. Alderamin gets its name from the Arabic phrase, að-ðirā‘ al-yamīn, which means “the right arm.”

As Greek mythology tells the tale, Cepheus was the king of Ethiopia and the husband of Cassiopeia. One day Cassiopeia bragged to the sea nymphs of her beauty being higher than them all. The nymphs were outraged and in retaliation asked Poseidon to punish the arrogant Queen. Poseidon being married to one of the sea nymphs was happy to oblige and summoned a sea monster (Cetus the Whale) to ravage the land.

When the water came, Cepheus turned to a oracle for help. It told him he and Cassiopeia would have to sacrifice their daughter, Andromeda, to appease the sea monster. Cepheus obliged and chained Andromeda to a stone; however, before the monster could take her Perseus rescued her and they were later married.

As the story goes, Phineas (a former lover of Andromeda) attended the wedding in order to claim Andromeda. He was outnumbered and in the battle used Medusa’s head to turn his opponents into stone. In the haste and fooliness, Cepheus and his wife looked at the head and were instantly turned to stone. Poseidon then placed both the king and queen into the sky to commemorate the incident.

Cepheus is a fascinating constellation, so the next time you are gazing into the night sky, be sure to search out this intriguing figuration of stars.