Capella is a four-star system made up of two pairs of binary stars. Historically and mythologically, Capella is a bit of a mystery. Richard Hinkley Allen from Star Names tells us the ancient Arabs referred to Capella as ‘the Driver’ or a shepherd driving his flock of sheep across the night sky with the nearby Pleiades being construed as large animals.

Capella is located only 42.2 light-years away in the constellation of Auriga (the Charioteer). This constellation is the 21st in size (out of the 88) and is home to three Messiers and two meteor showers. It also occupies about 657 square degrees in the night sky.

This star can be seen in its home constellation located in the first quadrant of the Northern hemisphere, specifically between latitudes of +90 and -40 degrees. Because this star is so bright it can be viewed by the unaided eye in most areas of the mid-latitudes of the United States and Europe. Here this star will appear at some point in the night sky; however, in the Northern latitudes, Capella shines high in the night sky in the winter months. If you live south of 44 degrees south latitudes, you will not be able to view this celestial wonder. When searching for Capella, look to the five-sided rectangular-like pattern of Auriga. Capella is located in the upper right hand corner. 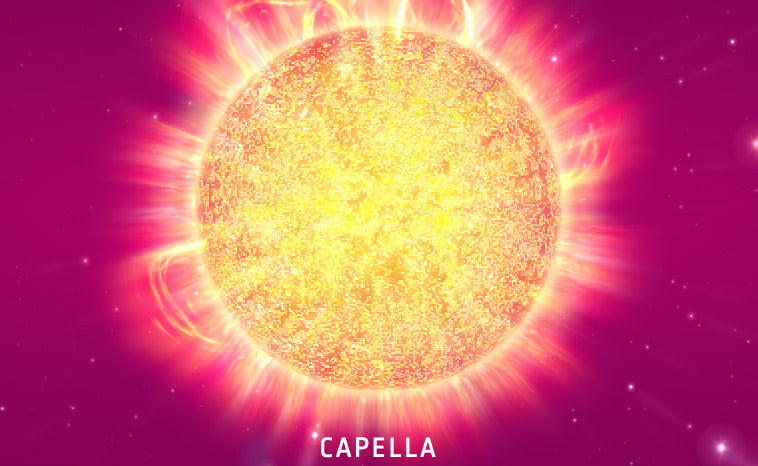 Capella is a four star system made up of two pairs of binary stars. The first binary pair closely orbit each other and are classified as large type-G giant stars. They have 2.5 times the mass of the Sun and 10 times its radius. Capella Aa and Capella Ab have also gone through their core hydrogen supply putting them into the giant star category; however, astronomers are still unsure where these two stars are on their evolutionary path. The second pair of binary stars (Capella H and Capella L) are both red dwarfs and are relatively cool and faint. They are separated from the first pair by 10,000 astronomical units.

Alpha Aurigae is the brightest star in the Auriga constellation and the sixth brightest in the night sky, plus the third most luminous in the Northern celestial hemisphere. Around 210,000 years-ago, Capella shone the brightest overall with a magnitude of -1.8. Capella twinkles with a deep yellowish-white color at night and more a yellow hue during daytime observations through a telescope.

Both historically and in mythology, Capella is a bit of a mystery. Richard Hinkley Allen (Star Names) tells us the ancient Arabs referred to Capella as “the Driver” or a shepherd driving his flock of sheep across the night sky. This makes sense as the nearby Pleiades could be construed as sheep, goats or even camels. Ancient Egypt also gave Capella some significance as it appears on the Denderah Zodiac as a mummified cat.

Capella is not just another twinkling celestial object, it has some cold hard facts and true significance. So if you have a chance to view this fascinating star of “the Charioteer’s Shoulder or the Goat” be sure to check it out.

Fly to Capella in 3D!