Canis Minor is derived from the Latin language and means “the lesser or smaller dog.” It represents the smaller dog following the hunter Orion. It can be found in the second quadrant of the Northern hemisphere and is located specifically between latitudes of +90° and -75°. Along with other constellations, Canis Minor was first catalogued in the 2nd century by the Greek astronomer, Ptolemy.

Canis Minor is the 71st constellation in size in the night sky, occupying only 183 square degrees. Canis Minor is also neighbors with Cancer, Gemini, Hydra and Monoceros. In addition, this constellation has five stars and only one notable deep space object. 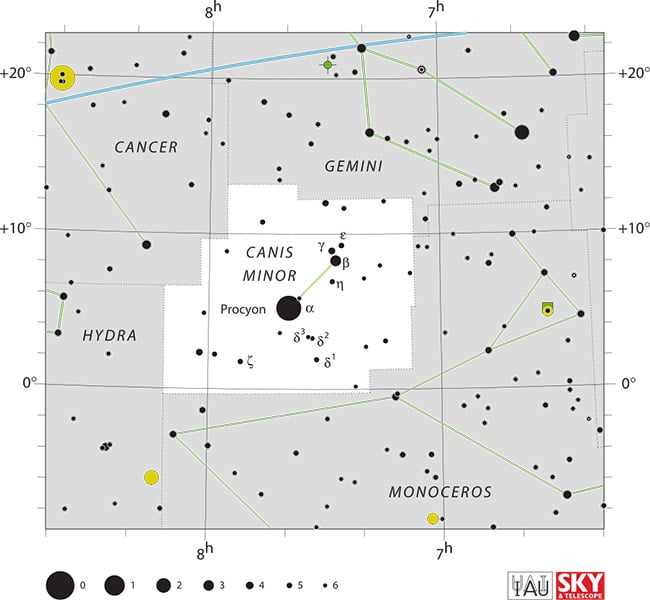 Canis Minor does has a number of deep space objects; however they are all quite faint so for this reason we have listed only one notable deep sky object. Read on to discover some fascinating facts about this celestial wonder. 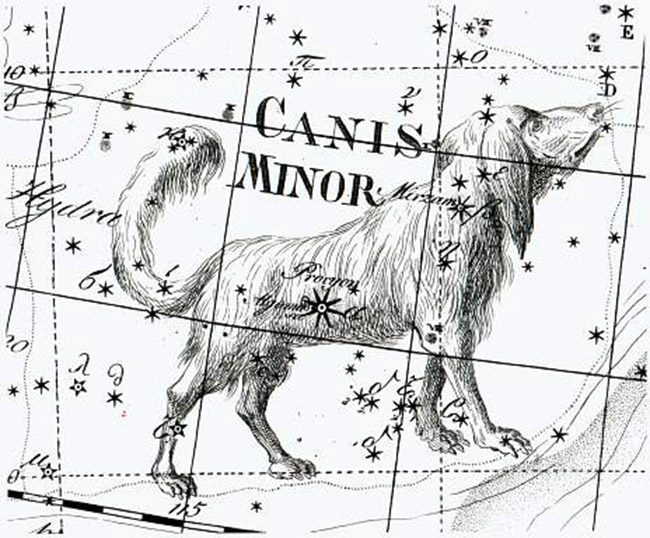 Out of all the stars that make up the Canis Minor constellation, none shine brighter than Procyon (Alpha Canis Minoris). This star shines the seventh brightest in all the night sky and is considered a binary star system. Its main component is a white main sequence star with a faint white dwarf companion. It is located only 11.41 light-years from the Sun, which is where it may gain some of its luminosity from. Procyon gets it name from the Greek language (prokyon) meaning, “before the dog,” as this star rises in the Northern hemisphere before Sirius, the Dog Star.

Canis Minor is steeped in mythology and is mostly viewed as one of the dogs following the hunter, Orion, in Greek myths. However, another legend tells of a winemaker’s dog by the name of, Maera. As the story goes, Icarius (the winemaker) gave his friends some wine, but not being accustomed to strong drink they became intoxicated and killed Icarius, whom they believed tried to poison them. His faithful dog ran to his daughter for help, but it was too late and Icarius died. Both his daughter and dog were so overcome with grief they took their own lives. It is believed that Zeus later placed their images in the heavens; Icarius is associated with the constellation of Bootes and Maera is Canis Minor.

Canis Minor is a fascinating constellation, so the next time you are gazing into the night sky, be sure to search out this intriguing figuration of stars.