Beta Cassiopeiae has the traditional name of Caph which is derived from the Arabic language (kaf) meaning ‘palm’. The core of this star is in the process of heating and shrinking, while its outer layers are cooling and expanding. In fact, it is now about three times the size of the Sun. Caph also has a companion star.

Caph is located approximately 54.5 light-years away in the constellation of Cassiopeia. It is the 25th constellation in size out of the 88 and is home to open clusters, a supernova remnant and a star-forming cloud known as the Pacman Nebula. 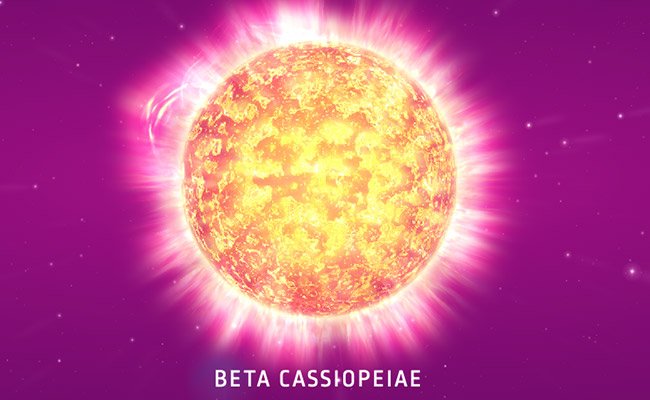 Caph is either a giant or a subgiant star belonging to the spectral class of F2. It is also considered a Delta Scuti variable. Because this star is using up its core hydrogen supply, it is in the process of heating and shrinking, while its outer envelope is cooling and expanding. In fact, it is now about three times the size of the Sun. In addition, Caph is picking up rotational speed completing a full cycle every 1.12 to 1.16 days. For this reason, Beta Cassiopeiae is an oblate sphere shape with 24 percent more equator radius than its polar regions. Caph also has a companion star that orbits it every 27 days; however, little is known about this dim star.

Because Beta Cassiopeiae is a “monoperiodic pulsator” it ranges in magnitude from +2.25 to +2.31 over a 2.5 hour-period. It shines approximately 28 times that of the Sun and has an effective temperature of 7,079 Kelvins or 12,282 degrees Fahrenheit (6,805 degrees Celsius).

In pre-Islamic Arabic the term (al-Kaff al-Khadib) meaning, “the stained hand” referred to the five stars making up the ‘W’ of Cassiopeia – it was thought to depict a hand stained with henna. The term was then abbreviated and came to signify β Cassiopeiae. The old “stained hand” was then part of an asterism stretching from the Pleiades. This marked the “head” which went through Taurus and Perseus and on into Cassiopeia, while the other “hand” was in Cetus.

Beta Cassiopeiae is not just another twinkling celestial object, it has some cold hard facts and true significance. So if you have a chance to view part of the “W” be sure to check it out.

Fly to Beta Andromedae in 3D!