Alpha Phoenicis is also called Ankaa which is derived from Arabic meaning ‘the phoenix’ and also sometimes as Nair al-Zaurak meaning ‘the bright star of the skiff’. It is the 85th brightest star in the night sky shining with 80 times the luminosity of the Sun. Petrus Plancius, a Dutch astronomer, was the first to catalogue this star in the 16th century.

Alpha Phoenicis is located approximately 85 light-years from Earth in the constellation of Phoenix. It is the 37th largest constellation in the heavens and is also home to a number of galaxies and a black hole candidate (HLX-1). There is also one annual meteor shower (the Phoenicids) that happens around December 5th.

Ankaa can be seen in its home constellation located in the first quadrant of the southern hemisphere, specifically between latitudes of +32 and -80 degrees. If you live in Australia and South Africa, this star can be seen with the naked eye during the summer months. If you are north of the equator, Alpha Phoenicis is situated quite low in the night sky. However, if you live north of the 40th parallel it cannot be viewed at all. 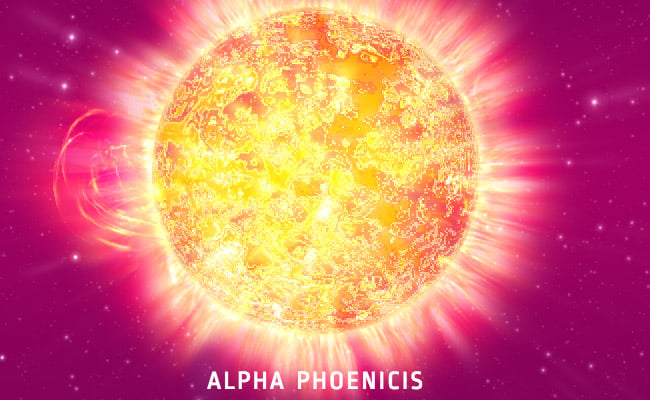 Alpha Phoenicis is a spectroscopic binary star that orbits its companion over a 10.5 year-period. The primary star is thought to be an orange giant that is burning through its helium. This means it will most likely shed its outer layers then evolve into a white dwarf. Ankaa is also estimated to have about 15 times the radius of the Sun and four times its mass. However, not much is known about the companion star.

This star out shines them all in its home constellation and is the 85th brightest star in the night sky with 80 times the luminosity of the Sun. Ankaa has an apparent visual magnitude of 2.4. In addition, this star is burning at an effective temperature of 4,500 Kelvins (7,640 degrees Fahrenheit or 4,226 degrees Celsius).

Although there is no mythology specifically associated with Alpha Phoenicis, the constellation was used to commemorate the mythological bird that rose from its own ashes. The entire constellation of Phoenix was first catalogued in the 16th century by Petrus Plancius (a Dutch astronomer). He based these stars on the observations done by the Dutch navigators, Pieter Dirkszoon Keyser and Frederick Houtman.

Alpha Phoenicis is not just another twinkling celestial object, it has some cold hard facts and true significance. So if you have a chance to view this star of “the phoenix” in the night sky be sure to check it out.

Fly to Alpha Phoenicis in 3D!