Alpha Leporis is located in the constellation of Lepus, ‘the Hare’, and is also called ‘Arneb’. This 13 million year-old star is considered a lower luminosity yellow-white supergiant that may be entering the last phase of its cycle. It has a mass 14 times the Sun and 129 times its solar radius. Arneb was catalogued in the 2nd century by a Greek astronomer, Ptolemy.

Alpha Leporis is located approximately 2,200 light-years from Earth in the constellation of Lepus. Lepus is the 51st constellation in size and is represented by a rabbit being hunted by Orion and his dogs. This constellation is also home to many deep space objects.

Arneb can be seen with the naked eye and is situated in its home constellation in the second quadrant of the Northern hemisphere, between latitudes of +63 and -90 degrees. The easiest way to find Alpha Leporis is to look for the center star of Orion’s Belt. Now drop due south past ‘the hunter’s’ feet into Lepus. From here Arneb is almost due west of Sirius (the brightest star in the night sky). 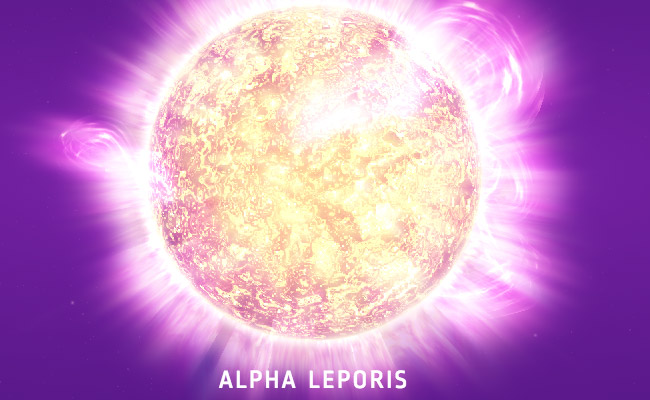 This 13 million year-old star is considered a lower luminosity yellow-white supergiant that may be entering the last phase of its cycle. It has a mass 14 times the Sun and 129 times its solar radius. This star is showing signs of stellar evolution due to its heating and contracting and is suspected to end in a supernova explosion.

Alpha Leporis is the brightest star in its home constellation and shines with an apparent visual magnitude of 2.589. It is estimated to be about 32,000 times more luminous than the Sun. The outer shell of Arneb burns at an effective temperature of 6,850 Kelvins (11,870 degrees Fahrenheit or 6,576 degrees Celsius) which is what gives it that yellow-white color.

Although, there are no myths associated with Alpha Leporis it was catalogued (along with other stars) in the 2nd century by a Greek astronomer known as Ptolemy.

Alpha Leporis is not just another twinkling celestial object, it has some cold hard facts and true significance. So if you have a chance to view the “hare” in night sky be sure to check it out.

Fly to Alpha Leporis in 3D!