Alpha Crucis is made up of two stars and is part of the Southern Cross in its home constellation. Historically, Amerigo Vespucci charted the stars in 1501, then an Italian explorer by the name of Andrea Corsali made a more accurate chart in 1515. This star appeared on celestial globes by both Petrus Plancius in 1598 and also Jodocus Hondius in 1600.

Alpha Gruis is located approximately 101 light-years from our solar system in the constellation of Grus. Due to its age, Alnair is suspected to be a part of the AB Doradus moving group that share the same motion through space.

Alnair can be seen with the naked eye and is situated in the Grus constellation in the fourth quadrant of the Southern hemisphere, between latitudes of +34 and -90. Alpha Gruis is specifically the most luminous star on the right side of the crane between its shoulder and middle wing. 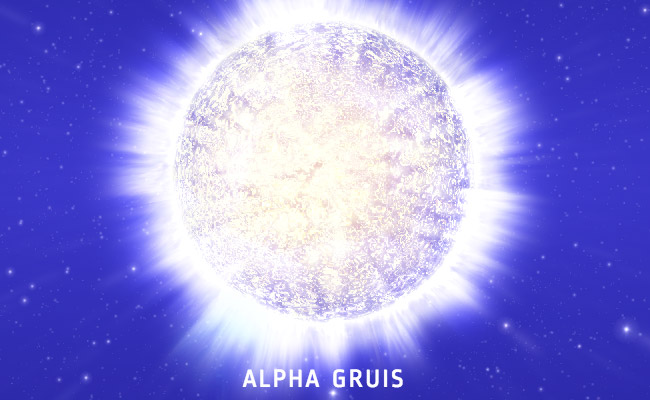 The specific classification of this star has not been determined; however, it is either a main sequence star with a stellar classification of B6 V or a subgiant of B7 IV. It is estimated to be about 100 million years-old and has 4 times the solar mass and 3.4 times the radius of the Sun. In addition, Alnair is a fast spinner at 215 kilometers/second (133 miles/second) and shows signs of a dust disk in its orbit.

Alnair is the brightest star in its home constellation and shines with the intensity of 263 times that of the Sun and has an apparent visual magnitude of 1.74. The outer layer of Alpha Gruis burns at a temperature of 13,920 Kelvins (24,596 degrees Fahrenheit or 14,202 degrees Celsius) and is what gives this beautiful star its blue-white appearance.

The stars of the constellation Grus were once part of the Pisces Austrinus constellation. In the 16th century, Petrus Plancius (a Dutch astronomer) took the specific stars that now make up Grus and named them “the crane.” He did this from the observations of Dutch navigators Pieter Dirkszoon and Frederick de Houtman. Although, there is no specific mythology associated with this star its name does have significance.. Alnair itself is Arabic (al-nayyir) meaning “the bright one,” from the phrase (al-Nayyir min Dhanab al-ḥūt,) “the bright (star) belongs to the tail of the (Southern) Fish (constellation).” The Southern Fish is the English name for the constellation Piscis Austrinus.

Alpha Gruis is not just another twinkling celestial object, it has some cold hard facts and true significance. So if you have a chance to view this natural wonder in the Grus constellation be sure to check it out.

Fly to Alpha Gruis in 3D!