Alpha Crucis is made up of two stars and is part of the Southern Cross in its home constellation. Historically, Amerigo Vespucci charted the stars in 1501, then an Italian explorer by the name of Andrea Corsali made a more accurate chart in 1515. This star appeared on celestial globes by both Petrus Plancius in 1598 and also Jodocus Hondius in 1600.

Alpha Crucis is located approximately 320 light-years away in the constellation of Crux where it makes up part of the “Southern Cross.” This constellation also has one meteor shower that occurs within its boundaries (the Crucids).

You can see Alpha Crucis with the naked eye if you are south of 27 degrees north latitude. Here it is best viewed around midnight from late March to early April. In addition, when you’re facing south, Alpha Crucis marks the bottom of the Southern Cross and is the nearest star to the horizon. To further help pinpoint Crux, two very bright stars (Alpha Centauri and Beta Centauri) are known to be the “Southern Pointers.” Simply draw an invisible line three times the distance through these stars to find the top of the Southern Cross. Interestingly enough, if you are around Brisbane, Australia, you will find this star every night throughout the year. However, most locations in North America cannot see this celestial wonder at all. 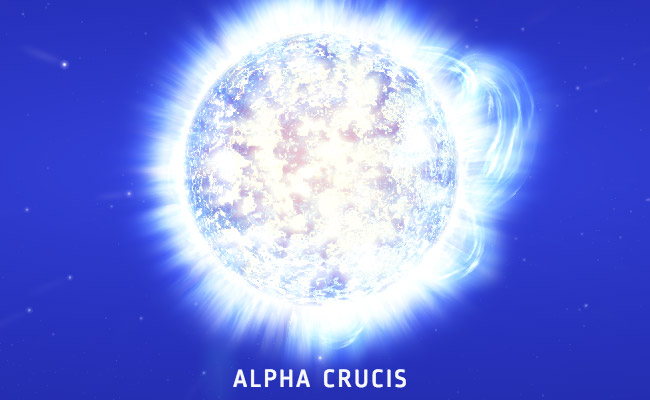 Alpha Crucis is a multi star system composed of two main components. The primary star, Alpha-1 Crucis is catalogued as a B-class subgiant and also a spectroscopic double star. Alpha-2 Crucis is a B-class dwarf star that is separated from the primary by only four arc seconds. Both of these stars are almost O stars as they burn very hot and orbit each other over a 76-day period. In addition, there is also another B-class subgiant in the system; however it is more distant from the two and merely along the same line-of-vision.

Acrux is the brightest star in its constellation and the 12th brightest star overall in the night sky. Alpha-1 Crucis has an apparent visual magnitude of 0.77 and shines with the luminosity of 25,000 Suns. Alpha-2 Crucis shines 16,000 times brighter than the Sun.

Historically, Amerigo Vespucci charted the stars in 1501, then an Italian explorer by the name of Andrea Corsali made a more accurate chart in 1515. Crux and its stars appeared on celestial globes by both Petrus Plancius in 1598 and also Jodocus Hondius in 1600. Although most stars take their names from Latin, Greek or Arabic, Acrux is simply the “A” from Alpha and “Crux” for the constellation. It was given this name by Elijah Hinsdale Burritt a farm boy from Connecticut turned star cartographer in 1835. This star is also represented on several flags (along with the other four stars of the Southern Cross); Australia, Papua New Guinea, New Zealand. It also represents the State of Sao Paulo and is one of the 27 stars (representing different states) on the Brazilian flag. Even though there is no mythology surrounding this particular star, the Southern Cross holds significance for many cultures. A stone image has been found on Machu Picchu in Peru of Crux. The Inca’s called this constellation Chakana, meaning “the stair” and the Maori called it Te Punga, meaning “the anchor.”

Alpha Crucis is not just another twinkling celestial object, it has some cold hard facts and true significance. So if you have a chance to view this natural wonder in the Crux constellation be sure to check it out.

Fly to Alpha Crucis in 3D!