Aldebaran is considered the “Fiery Eye of the Bull” in its home constellation. It’s a massive star spanning more than 44 times the diameter of the Sun and 425 times more luminous. It glows bright orangish-red and was thought to be used to predict the June Solstice. Aldebaran was also the name of one of the chariot horses in Ben Hur.

Aldebaran can be found in the Taurus constellation, lying in the vicinity or Orion with its three brightest stars pointing to Aldebaran. This star derives its name from the Arabic language (al-dabaran) meaning “the follower.” The name was designated for this star as it appears to follow the Pleiade Cluster of the Seven Sisters across the night sky. It is also sometimes referred to as Alpha Tauri. In addition, this star lies about 65.1 light-years from Earth which converts to 382 trillion miles or 614 trillion kilometers.

The good news about Aldebaran is it it large enough and bright enough to be seen with the naked eye. The best time to view Aldebaran in the Northern hemisphere is in the winter and spring months (December through May). Although, some amateur observers may mistake Aldebaran as part of the V-shaped Hyades Cluster, it is simple in the same line-of-sight as this more distant bundle of stars (150 light-years). In addition, Aldebaran can also be occulted by the Moon. 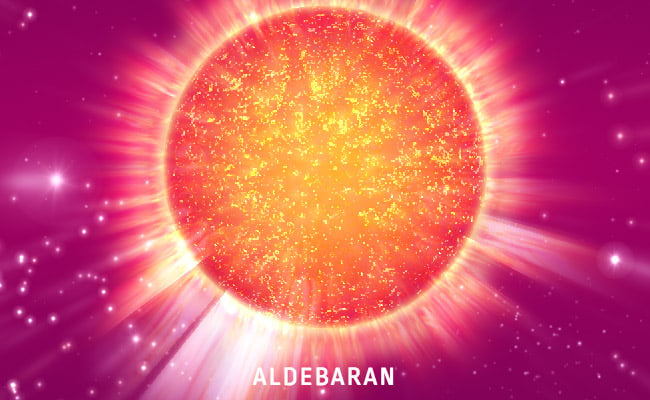 This celestial wonder is noted for its massive size and brilliant reddish-orange glow. It is a K5 star that is classified as a type LB slow irregular variable. It is massive compared to our Sun, spanning more than 44.2 times its diameter and burns at extreme surface temperatures of about 4,000 Kelvins (the Sun is 5,800 Kelvins). Aldebaran also has a few smaller stars associated with it.

The “bull’s eye” is the brightest star in the constellation of Taurus and the 13th brightest in the night sky. It shine with a visual apparent magnitude ranging between 0.75 and 0.95, making it about 425 times more luminous than our Sun.

Historically, Aldebaran took its place of honor in ancient Persia among the Four Royal Stars (the other three are Regulus, Antares and Fomalhaut). An astronomer by the name of, Jake Eddy, has proposed that the ancient Big Horn Medicine Wheel (a circle of stones found on top of a Wyoming mountain) may have been used by early Americans to view the rising of Aldebaran in order to predict their June solstice. This star also was honored in the classic movie, Ben Hur, appearing as the name of one of the chariot horses. In addition, another interesting fact will have the American space probe (Pioneer 10, heading for deep space) passing by this star in about two million years.

Aldebaran also has its place in mythology. Hindus believe this star to be associated with a beautiful young woman (Rohini) who was disguised as a deer and pursued by her lecherous father also disguised. Other cultures associate this celestial body with rain, while the Sioux culture believe the falling of Aldebaran to Earth led to the death of a serpent and the making of the Mississippi River.

Aldebaran is not just another twinkling celestial object, it has some cold hard facts and true significance. So if you have a chance to view this “fiery eye of the bull,” be sure to take a peek at one of the most intriguing views you may ever experience.

Fly to Aldebaran in 3D!