September is a month with a lot of variety in the night sky! Come explore the astronomical events of September 2020 with us! Learn more about the Fruit Moon, the ε-Perseid meteor shower, the Conjunction of the Moon and Venus and the Sextantid meteor shower.

Let us guide you through the astronomical events of September 2020. We have handpicked four mesmerizing astronomical events, especially for you. And best of all, they are all be visible with the naked eye in both the northern and southern hemispheres! If you have binoculars or a telescope at your disposal, feel free to use them. Don’t forget to write down the dates of the events in your calendar so you won’t miss them! 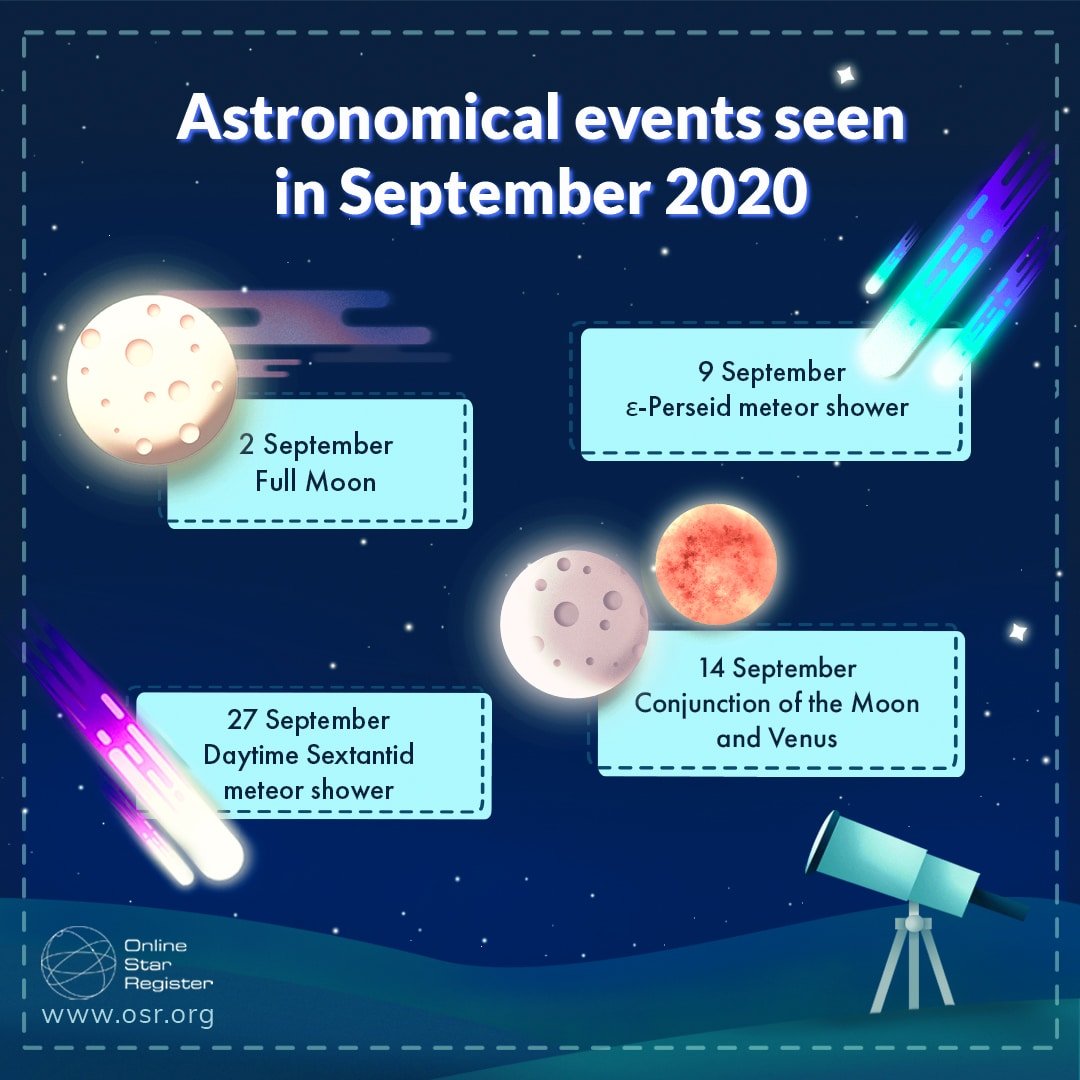 A full Moon is visible because it lies almost directly opposite the Sun in the sky. This month the Fruit Moon will be visible on Wednesday the 2nd of September from the constellation Aquarius. Make sure to find a light-free area to be able to spot the constellation Aquarius since its stars are faint and can be relatively hard to see. Need help finding the constellation? Use the OSR Star Finder App!
The Fruit Moon will appear at its highest in the southern hemisphere, although both northern and southern hemispheres will be able to view the full Moon. At the start of the night the Moon rises in the East and at the end of the night the Moon sets in the West. You can use a compass if you have trouble finding it!

Astronomical Event #3: Conjunction of the Moon and Venus

A conjunction is an event where two or more astronomical bodies share the same right ascension. So what does this mean? Actually, right ascension is simply the celestial equivalent of terrestrial longitude. Also known as the distance between East and West on Earth. As the Moon and Venus move along the ecliptic at different speeds, they pass each other from time to time. The planets are usually separated by no more than a few degrees when in conjunction.

While the Moon and Venus are sharing the same right ascension, they will still be too widely separated to fit within the view of a telescope. Nevertheless, it is still possible to see the conjunction with the naked eye or through a pair of binoculars!

We hope to have given you enough reason to go out exploring the galaxy with the astronomical events of September 2020! From full Moon to (daytime) meteor showers and the conjunction of the Moon and Venus – there’s enough to discover!