The search for water (or the trail of water left behind) on Mars continues. But researchers are excited by the find of a gully on the Red Planet that may have been carved out by a flowing river of water. 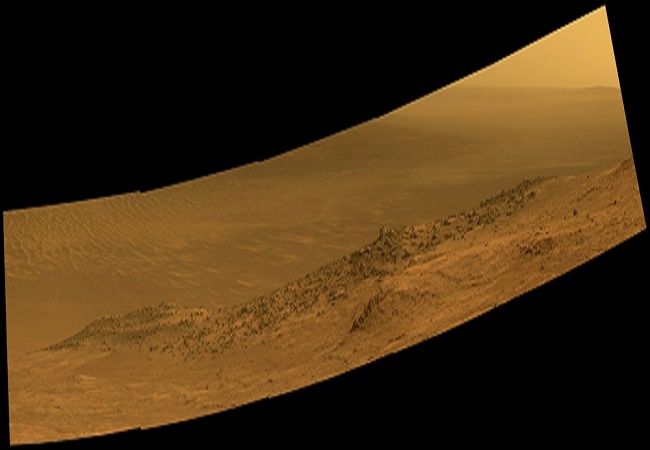 This image is from NASA’s Mars rover Opportunity at “Wharton Ridge,” an area that forms part of the southern wall of “Marathon Valley” on the rim of Endeavour Crater.
Photo Credit: NASA/JPL-Caltech/Cornell/Arizona State University.

NASA’s Opportunity Mars Rover is about to “go where no man has gone before” into a gully that may have been carved out by water.

On its extended mission, Opportunity roamed over to the “Bitterroot Valley,” (a portion on the western rim of the Endeavour Crater). After seven long years of investigating, it finally reached the edge of the crater in 2011. Here Opportunity made a shocking and thrilling discovery; the evidence of acidic ancient water. 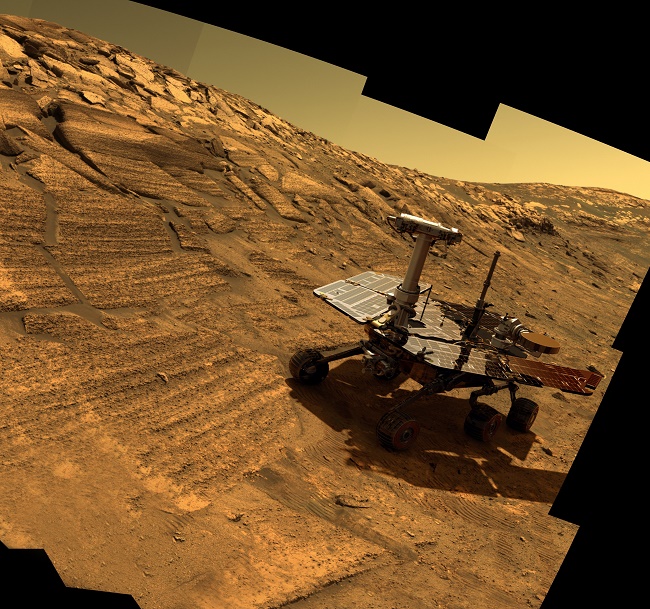 Opportunity was launched in July of 2003 for a mission that was to last 90 Martian days, or 92.4 Earth days. It landed on Mars in January of 2004 and will investigate the Endeavour Crater as a part of it’s two-year extended mission.

Steve Squyres of Cornell University, Ithaca, New York and Opportunity’s Principal Investigator made a statement to the press saying he was confident that water was present and involved in the carving out of this gully.

He also states that they have known about these “fluid-carved” gullies on Mars from orbital views since the 1970s. However, they’ve never had the opportunity to examine one up-close.

There are three main objectives for this new mission extension to the gully; whether the fluid was a debris-flow (with lots of rubble lubricated by water), whether the flow was mostly water and less debris and lastly to examine rocks from the geographical layer that existed before the Endeavour Crater.

Unfortunately, scientists are not sure if they will be able to accomplish the last goal as the area may not have rocks old enough to give them a solid answer.

What other plans does NASA hope to accomplish in the coming years?

Opportunityy, Curiosity, three NASA Mars orbiters, and surface missions launching in 2018 and 2020 are all in preparation to hopefully send humans to Mars in the 2030’s.

Want more of Mars? Check out these new images. In Stunning New Photos of Mars Revealed!