NASA is funding research to invent a better drilling rig to drill into Mar’s surface. Read on to learn more about this idea.

Scientists have worked in recent years to tap into the Martian surface to test its inner temperature. NASA’s InSight’s “Mole” spent a year fighting against the soil. The soil’s unexpected tendency to clump deprived the spike-like mole of the friction it needed to hammer itself to a sufficient depth. NASA called off further excavation after the “Mole” reached a depth of about 2-3 centimeters. Quinn Morely, from Planet Enterprises, proposes drilling robots to reach deep under Mar’s surface.

As part of NASA’s 2021 phase 1 NIAC selections, Mr. Morley believes that his idea may help NASA. Aside from meeting the goal of burrowing into the ground to obtain temperature readings, the goal becomes looking for water as well. Mr. Morley cites a study published in 2018 with regards to water existing below the surface. The article states that subglacial water exists 1.5 km in the South Polar Layered Deposits. To achieve this goal, Planet Enterprises suggests a new type of drilling rig. They look to the Perseverance rover as a prototype. In their example, they state that their drilling rig would comprise only components needed to drill successfully. As a result, the improved drilling rig may achieve drilling depths between 20 m and 50 m. Furthermore, they believe that they could continue to the depth of 1.5 km upon completion of those drilling depths.

How does Mr. Morley’s design work? As stated above, InSight’s “Mole” had issues with soil falling back into the hole. They did not foresee this as an issue when designing their temperature probe. They based their soil samples for practice off of previously obtained information. To combat these issues, the Planet Enterprises team has proposed “borebots.” Unlike InSight, which used cables, they have self-contained robots that drive up and down the borehole autonomously. Each borebot would be about 1 meter in length.

The borebots deploy from a tube moved into place by a simple linear machine located on the rover deck. It can begin drilling while driving into the borehole. To achieve a downward thrust, a rubber tank track system presses against the sides of the borehole. As a result, the borebot can then drill approximately 150 mm during each trip. Any ice that it encounters can then be removed and carried to the surface by driving up the borehole.

A robotic arm will remove the borebot from the borehole and move it into one of the service bays. These service bays will be located on the rover’s side for core sample removal and automated servicing. Mr. Morley’s design would allow the next borebot to go down the hole and start drilling. He states that a dozen borebots could be housed in honeycomb-type service bays. Furthermore, shorter holding bays near the rover’s rear can house extra coring bits and other spare parts. 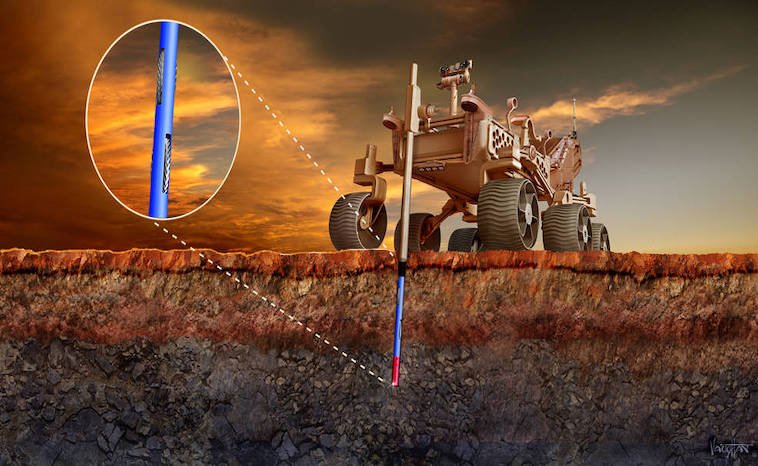 Planet Enterprises states that they believe a mission could take around four years. During that time, the drilling robots could collect thousands of core samples. As with other missions, samples would be returned to Earth for analysis. Mr. Morley believes dozens of samples could be stored during this time. Will Planet Enterprise get the go-ahead from NASA to manufacture this type of drilling rig? We have to wait for NASA to decide once they see the prototype from Planet Enterprise.