One of the brightest stars in the night sky has dimmed causing quite a stir in the scientific community. What star is dimming and what does it mean? Read on to find out more.

One of the most exciting and brightest stars in the night sky has dimmed. While this is not uncommon, this particular dimming has piqued the interest of astronomers all over the world. Betelgeuse, one of the most famous stars due to its size, has gained the attention of astronomers. Its light has dimmed, which is not all that unusual for a variable star; however, scientists believe it may be a sign of things to come. Specifically, it may indicate that the star has gone supernova.

At 642 light-years from Earth, Betelgeuse sits close to the Earth within the constellation of Orion. If Betelgeuse were at the center of our universe, it would inhibit the orbits of Mercury, Venus, Earth, Mars, and possibly Jupiter. For years, it held its position as one of the ten brightest stars in the night sky. However, since October 2019, it does not even make the top twenty list of bright stars. Dramatic fading has prompted scientists to suggest that the star might be entering a pre-supernova phase. Its light dimming possibly indicates that it will die in a fiery supernova explosion.

What will that explosion look like from Earth? We may be the first people ever to lay eyes on a supernova. Betelgeuse’s core will collapse in on itself from the weight of its gravitational pull. As a result, it will explode. After an initial brief flash, Betelgeuse will grow in brightness in our night sky. Scientists speculate it will become millions of times brighter than our Sun. It will appear as bright as the moon in the night sky and may also be visible during the day. In addition, it may last a couple of weeks or even months before it slowly goes away. 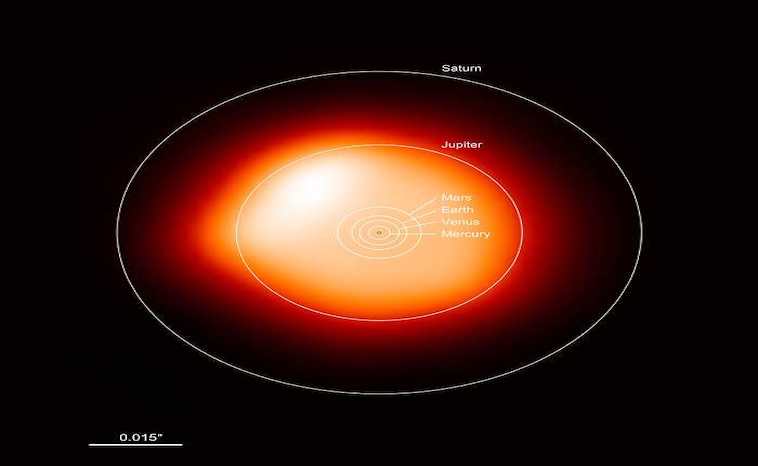 Think back for a moment to the year 1380. The people on Earth traveled by horse along unpaved roads. Christopher Columbus had not yet discovered America. King Charles VI of France crowned at age 12 after the death of his father. Why do we reference 1380? That quite possibly is when Betelgeuse went supernova. As mentioned earlier, it lies 642 light-years from Earth. Therefore, anything that happens to Betelgeuse takes 640 years for us to see. If the star has exploded, and we see it today, that means that it exploded before Columbus set sail across the Atlantic Ocean.

While we wait to see if the dimming means it exploded, other scientists have other opinions. “While it’s possible that the star could explode anytime between now and 100,000 years from now, this dimming might not be a sign that it’s about to blow,” says Sarafina Nance, an astronomy graduate student who studies Betelgeuse and stellar explosions at UC Berkeley.

A Question of Physics

“It could be caused by instabilities within Betelgeuse. She explained that different parts of stars could have different densities, and this density instability can cause energy to rise and fall within a star, moving energy from its inside to its outside. This, in turn, and can cause changes in brightness, causing the star to get bigger, to contract, and much more,” says Nance. Has dust kept us from seeing Betelgeuse? Nance added that matter ejected from the star might be creating “a sort of dust fog” that’s currently obscuring and “dimming” the star.

Whatever the reason for the light of Betelgeuse dimming, we look forward to seeing what happens in the coming years.