Betelgeuse is also known as Alpha Orionis and 58 Orionis and marks the center of the Winter Hexagon. It is also one of the stars that makes up the Winter Triangle. Betelgeuse is a 10 million year-old red supergiant star and one of the largest stars known today. It’s predicted to collapse under its own weight ending in a supernova explosion.

Betelgeuse is located approximately 643 light-years away in the constellation of Orion. This constellation is the 26th in size (out of the 88) and is home to two of the ten brightest stars, has three Messiers and also two meteor showers. Plus, it also contains one of the most famous asterisms in the night sky, Orion’s Belt.

This star can be seen in its home constellation located in the first quadrant of the Northern hemisphere, specifically between latitudes of +85 and -75 degrees. Because this star is so bright it can be viewed by the unaided eye. Betelgeuse is viewable to most areas in Canada, the United States, Europe and most of the northern hemisphere. To see this bright wonder look to Orion. Alpha Orionis is the star in the upper left corner of the large rectangle forming “the hunter’s” body. It also marks the center of the Winter Hexagon and is one of the stars that makes up the Winter Triangle. 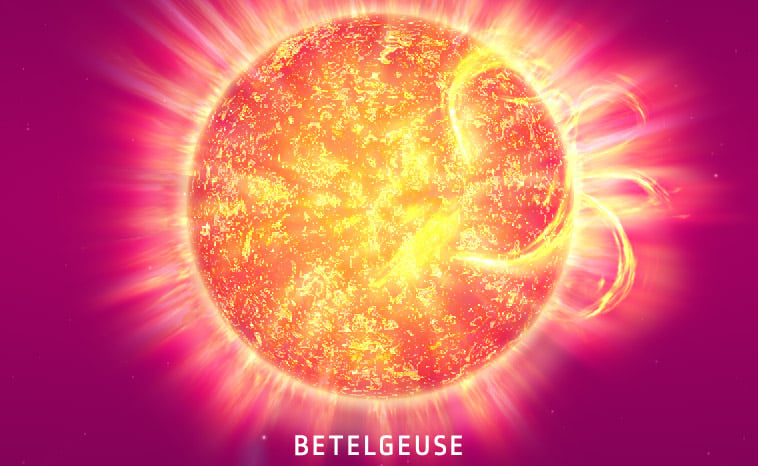 Betelgeuse is a 10 million year-old, red supergiant star and one of the largest stars known today. It has a mass 15 times that of the Sun, 600 times its radius and 200 times the Sun’s volume! Alpha Orionis is exciting to astronomers as it is getting ready to explode into a supernova. Once this happens the star is close enough to Earth to become a true area of intense study.

Alpha Orionis is the second brightest star in Orion and the eighth brightest in the night sky with an absolute magnitude of -6.05 . It is showing more than 100,000 times the luminosity of the Sun and has an effective temperature of 3,600 Kelvins or 6,020 degrees Fahrenheit (3,326 degrees Celsius). Betelgeuse is also considered a semi-regular variable star showing changes in its luminosity range from an apparent visual magnitude of 0.2 to 1.2. It shines with a distinctive orange-red hue.

Historically, Betelgeuse went through a period of mistranslation of the Arabic language to Latin. Its Arabic name initially Yad al-Jauza’ meaning “the Hand of al-Jauza,” referred to the hand of the constellation Orion. However, Betelgeuse is not used to represent Orion’s hand, but rather under his right shoulder. Astronomers believe this was a mistranslation and Betelgeuse is indeed used to indicate Orion’s shoulder. Sir John Herschel was the first person to note the variation of Betelgeuse’s luminosity in 1836 in his Outlines of Astronomy. In Greek mythology, Orion is a great hunter and the most handsome of men. He was thought to be the son of Poseidon the sea god and the daughter of King Minos of Crete. In Homer’s Odyssey, Orion is said to be very tall and armed with an indestructible bronze club.

Betelgeuse is not just another twinkling celestial object, it has some cold hard facts and true significance. So if you have a chance to view this fascinating star of “the hunter” be sure to check it out.

Fly to Betelgeuse in 3D!