One of the latest images captured by the NASA/ESA Hubble Space Telescope is that of the expanding shells of a binary star system. This beautiful “cosmic butterfly” is not only stunning visually, but lets scientists further study the process of binary stars in their final stage of evolution.

Discovered in 1947 by a German-American astronomer (Rudolph Minkowski) this planetary nebula has two lobes with streaming jets of gas expanding out from the central system at approximately 620,000 miles-per-hour (one million kilometers-per-hour).

To make this show even more spectacular PN M2-9 consists of a pair of stars at its core rather than the typical single star. The pair are suspected to have the same mass as the Sun; the smaller star is from 0.6 to 1.0 solar masses and the larger companion star is from 1.0 to 1.4 solar masses. Since the larger of the two is approaching the end of its evolutionary process it has already expelled its outer layers of gas, while its companion star is a further evolved white dwarf. 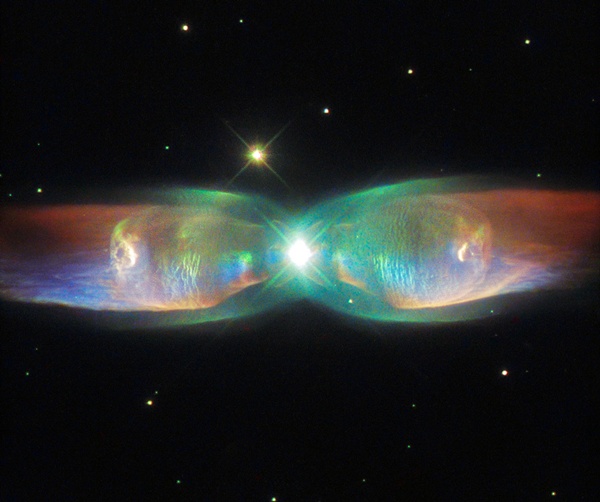 The metamorphosis this outer space binary butterfly is going through has been in process for about 1,200 years and is still expanding. The stars orbit each other about every 100 years, allowing the gas and debris from the pair to expand to 15 times the orbit of Pluto.

The oblong-shape of the “wings” on this phenomenon is most likely being caused by the motion of the two stars circling each other. Scientists believe as the white dwarf orbits the dying star, gas from it is being pulled into two lobes, rather than just one (typical of a single star nebula). However, astronomers are still debating whether bipolar nebula are all created by binary systems.

We are so fortunate with the aid of these super telescopes we are able to take a peek into the processes of space that we could only once image and theorize about before. What other mysterious objects or processes will the Hubble Telescope and our space probes capture next? We can only wait and see, but one thing we know for sure, it’s bound to be out-of-this-world.