Cydonia, the Face on Mars

In 1976 , astronomers were astounded by a satellite image resembling a face on the surface of Mars. What really is that “face”? Read on to learn more about the face on Mars.

We have discussed the term pareidolia. It causes people to see patterns such as faces and images in everyday objects. Many people think that the “face” on Mars is merely a case of pareidolia. However, some people believe that the face exists as a structure created by intelligent design.

Cydonia, the Face on Mars?

What exactly do we see when looking at the images of Mars? Mountains? Ancient ruins like the Sphinx or Pyramids? It seems that everyone has an opinion. What started this obsession with the face on Mars? In 1976, the Mars Rover Viking 1, took a series of photos of the mountain region of Cydonia. The pictures showed several mountains over a large area. In addition to the hills, one, in particular, looked like a face. NASA thought it would gain publicity by promoting it to the public. As a consequence, people believed that aliens built this structure on Mars. Located in the northern hemisphere Cydonia’s geological formations suggest the existence of standing water, lakes or even an ocean here for an extended period. (DLR, 2015)

There are numerous mesa-like structures and smaller flat-topped mountains. Some suggest that eroded highlands inhabit large parts of the region. Planetary researchers believe that parts of these northern lowland plains were once the bed of an ocean or lakes. Incidentally, they were covered by layers of lava or sedimentary deposits several hundreds of meters deep. After a long period, erosion removed this layer. 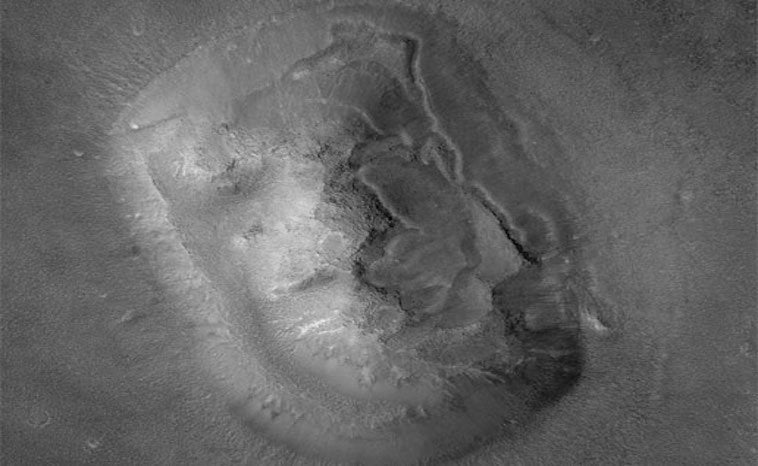 Did they think they photographed a face? The mountaintop looks like a three-kilometer-long face. Why? Terrain features and the angle of shadows led to the creation of the face. All of the Mars researchers at the time believed it was an optical illusion. The HRSC camera captured the face on Orbit 3253, and the images were published in September 2006. Based on new photos, the mountain no longer contains a face. The angle and lighting removed the “face” from the image. As a matter of fact, the mountain now resembles the other mountains in the area.

This high-resolution image from the Mars Orbiter Camera about the Mars Global Surveyor spacecraft shows the famous “Face on Mars” in detail, clearly showing it to be a natural geological formation. 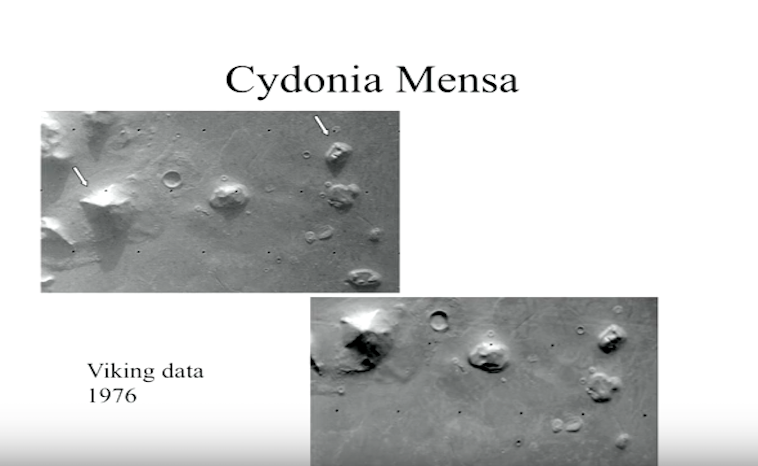 The internet has various articles full of ideas and speculation with regards to the face on Mars. However, it seems everyone wants to believe that ancient civilizations once inhabited the red planet. Some pictures taken from satellites seem to suggest pyramid structures near the face. Furthermore, they think the pyramid exists nearly 5 km away.

Dr. John Brandenburg, who worked for NASA, has been speaking about this for years. Brandenburg has worked on space plasma technologies, nuclear fusion, and advanced space propulsion

“We have found, in a nutshell, that Mars used to seem Earth-like, in the past, and became, eventually, the home not only to life, but a humanoid civilization, and that civilization was apparently destroyed by a nuclear attack from space, and we have to send astronauts there to find out what exactly happened. Did the people on Mars know who did this to them? And how can we make sure that this doesn’t happen to us?”

So what do you think? Is it the face of a sphinx with a mountain nearby. Or, does it seem likely that a simple mountain structure exists on Mars? One thing for sure, we won’t know until a space craft lands there and finds out for us.