Some stars have stranges objects floating around them while others spin extremely fast. Read on to learn more about bizarre stars.

In 2017, Dr. Tabetha Boyajian reported her findings of a strange star that was named KIC8462852 or the Boyajian Star. This star sparked a slew of conspiracy theories that an alien civilization was building a Dyson sphere or some other object around the star. A Dyson sphere would be for the gathering of energy to an interplanetary galactic battle abound. However, Boyjian’s star is not the only bizarre star in the sky.

The biggest star known to man is the hypergiant UY Scuti, with a radius 1,700 times that of the Sun. UY Scuti was first cataloged in 1860 by German astronomers at the Bonn Observatory, under the name BD-12 5055. It was classified as a variable star after a second detection, during which astronomers noticed that it grows dimmer and brighter over 740 days. UY Scuti lies nearly 9,500 light-years away, near the center of the Milky Way, within the constellation Scutum. 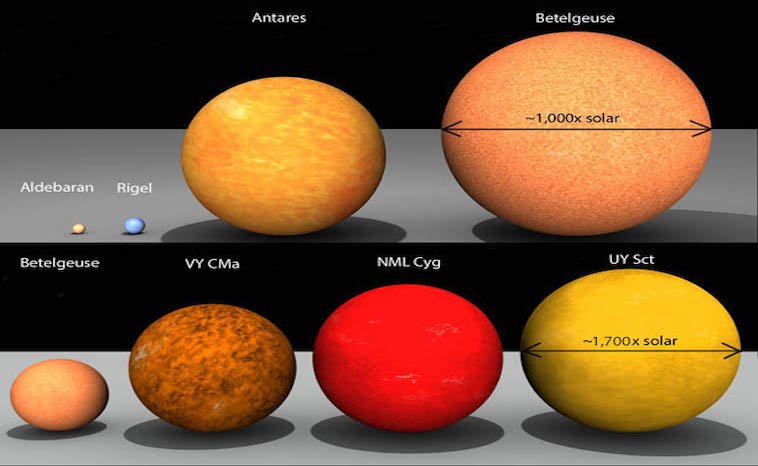 HD 140283, nicknamed the Methuselah star (after the oldest man in the Bible), is the oldest known star in the universe. Original estimates put the Milky Way star’s age at around 16 billion years old. However, this estimate caused a controversy in the scientific community. Scientists that believe in the Big Bang Theory estimate the start of the Universe at 13.8 billion years ago. To remedy the controversy, scientists introduced the “uncertainty” range. The uncertainty range refers to a period plus or minus 800 million years. Consequently, this means the star could be 13.7 billion years old. That is younger than the universe as it’s currently understood, though just barely.

Smallest Star That We Know

In 2014, scientists discovered the smallest known star, just 40 light-years away from Earth. Its formal name is 2MASS J05233822-1403022, and if it were much smaller, it wouldn’t even qualify as a star. This star is smaller than Jupiter and burns at just 3,272 degrees Fahrenheit. That temperature is about one-third the surface temperature of our Sun. It shines one- eight thousandths (1/8,000) as brightly as the Sun. Even though it is close, it can only be seen with a powerful telescope.

The neutron star, PSR J1748-2446, gets the award as the fastest-spinning celestial object in the Universe. Its surface is harder than a diamond. Furthermore, ts density is 50 trillion times greater than that of lead. It has an impressive magnetic field with a trillion times more intense than the Sun. Scientists believe it’s the most extreme neutron star.

Przybylski’s star, also known as HD 101065, is hidden within the Centaurus constellation in the southern sky. It lies just beyond what our eyes can see. It’s about four times the mass of the sun and contains elements not typically seen in stars, including uranium.  Most stars don’t typically fuse anything heavier than the element nickel. However,  Przybylski’s star seems to only form heavier elements, which are usually seen in violent events like supernovae.