If you look into the water and see a dark shadow do you think it is a fish? If it is large, do you think it may be a shark? It is hard to tell from shadow what lies below the surface of the water. Scientists are trying to discover what is passing in front of the Boyajian Star. Read on to learn more about this great mystery.

In 2009, Nasa launched the Kepler Space Telescope with the objective of finding planets outside of our solar system. The telescope focused on one area at a time and monitored the brightness of the stars in that area. Often it monitors 150,000 stars during a focused event. While looking at the area between the constellations Cygnus and Lyra, it captured a data point every 30 minutes for 4 years. During that time, Tabitha Boyajian, a Yale astronomer, analyzed the data. A particular star had some unusual events associated with it. The star became known as KIC8462852 or the Boyajian Star.

The Kepler telescope records dips in brightness that may indicate a planet passing in front of the star. NASA’s computers looked for dips in the data. Wondering if the computers missed critical information, Yale University created a project named Planet Hunters. The goal of the project was to enlist the help of citizen astronomers to look for the characteristic drop in light due to an orbiting extrasolar planets (exoplanets) crossing in front of their parent stars. The Yale scientists believed that humans have a better ability to recognize patterns than even the most sophisticated computers.

When a planet passes in front of a star they block a small portion of the light from that star. The depth of the drop reflects the size of the object itself. For example when Jupiter passes in front of our Sun it makes a 1% drop in the star’s brightness. Typically transits lasts only for a few hours.

When Planet Hunters looked at the transit of KIC 8462852 in May of 2009, they found a substantial dip indicating a large object. The fact that the transit lasted for almost a week perplexed them,  which then led to speculation as to what could possibly cause this. They knew that the data indicated that the object passing in front of “Tabby’s” star was bigger than Jupiter.

In February of 2013 several dips occurred with transits lasting up to 100 days. Within each dip, overlapping events occurred, along with dips at 20%. With a 20% drop it indicated that whatever was blocking the light had an area of over 1000 times that of Earth. At this point the Kepler mission ended. This past May scientists detected a 22% dip in the transition that lasted 5 days. 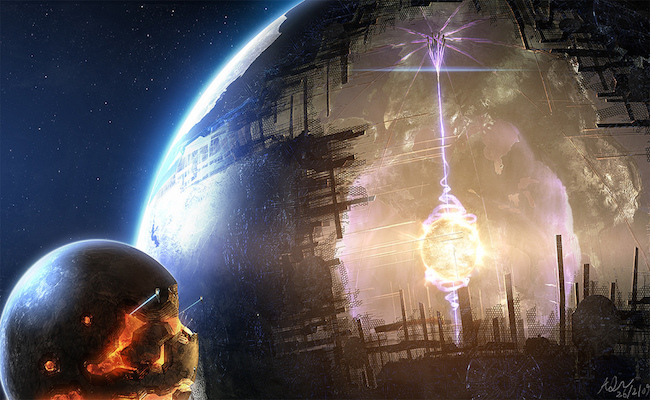 Theories from space aliens building a Dyson Sphere  for the gathering of energy to an interplanetary galactic battle abound. Nobody knows for sure, but just like a dark shadow in the water, only collection and study of more data will help solve this mystery. You can learn more about the Boyjian Star Project here.