The red supergiant Betelgeuse unexpectedly dimmed in late 2019. Astronomers began to speculate that it may have reached the end of its lifecycle. However, it’s no longer dim. Read on to find out what caused it to dim and what astronomers think will happen next.

In January of this year, we reported on the dimming of one of the brightest stars in the night sky. The red supergiant Betelgeuse, which lies in the constellation Orion, has been a favorite to astronomers for centuries. Due to its favored status, we know much about Betelgeuse. It is one of the most researched stars. When it began to dim in late 2019, astronomers feared the worse. They believed it had reached the end of its lifecycle. However, this past spring, it reversed course and began shining brightly once again. The mystery of Betelgeuse dimming has been solved.

A new study suggests that the dimming was inherent to Betelgeuse itself. Researchers scrutinized the supergiant in January, February, and March of this year using the James Clerk Maxwell Telescope (JCMT) in Hawaii. This super telescope views the universe in submillimeter light. Submillimeter light can see wavelengths invisible to the human eye. Therefore, they can see objects not seen by other types of telescopes.

Dr. Thavisha Dharmawardena, a postdoctoral researcher at the Max Planck Institute for Astronomy, Germany, and Dr. Steve Mairs, Senior Scientist at the James Clerk Maxwell Telescope, Hawaii, USA, led the study. The JCMT telescope revealed large sunspots. In previous opinions, astronomers thought that matter ejected from the star might be creating “a sort of dust fog” that was obscuring and “dimming” the star.

“​This provided the crucial information that allowed us to conclude that there was no dust in the way; Betelgeuse was feeling shy with a face full of spots.”​

“What surprised us was that Betelgeuse turned 20% darker during its dimming event even in submillimeter light. This behavior is not at all compatible with the presence of dust,” Dharmawardena said. “It was very exciting to realize that the star itself had undergone this massive change.” 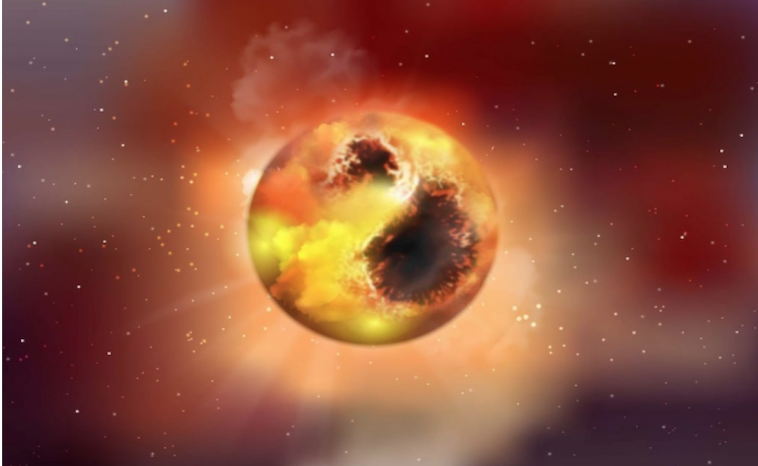 Unfortunately, it appears that Betelgeuse will not be going supernova anytime soon. The combined data suggest that Betelgeuse’s dimming was associated with a drop in the mean surface temperature of around 360 degrees Fahrenheit (200 degrees Celsius). Its usual temperature is about 5,840 degrees F, or 3,230 C.)

“Together with our result, this is a clear indication of huge starspots covering between 50% and 70% of the visible surface, each having a lower temperature than the rest of the surface,” Dharmawardena said. Starspots are temporary dark, relatively cool patches on a star’s surface that feature very strong magnetic fields.

Dr. Dharmawardena and Dr. Mairs plan to watch Betelgeuse over the next year. Why? Massive stars (Betelgeuse is 11 times heavier than our Sun) are important to study as they are the main drivers of chemical evolution in the universe.

“Previous generations of stars like Betelgeuse have physically manufactured most of the elements we find on Earth and indeed in our bodies, distributing them throughout the Galaxy in massive supernova explosions,”​ Mairs explains.

For now, the Betelgeuse dimming mystery has been solved. We will continue to watch for news regarding the massive Betelgeuse.