Traveling the Surface of the Moon by Car

Imagine trying to drive on the moon. What would your vehicle look like? What would your tires be made of? How fast could you go?  For astronauts to learn about the moon, scientists developed a special car to travel its surface. Read on to find out interesting facts about the Lunar Roving Vehicle.

In 1971 the Apollo Lunar Roving Vehicle made its debut during the Apollo 15 mission to the moon. This special vehicle, constructed in only 17 months, allowed the astronauts to cover large areas of the moon. For the first time they had the ability to travel further from their landing module. Prior to having a vehicle they had to remain close to the landing module.

“The “Moonbuggy” allowed the collection of several hundred pounds of rocks for scientists to study back here on Earth.”

A Special Car For The Moon

The battery powered rover proved to be an extremely dependable vehicle, allowing the astronauts to explore many square miles away from their landing sites with ease and safety. Two 105 amp, 36 volt, silver zinc batteries powered the vehicle. Tires constructed of piano wire and chevron shaped treads helped the astronauts to travel across craters and rocky terrain. The vehicle could manage slopes up to 25 degrees. Each tire weighed 13 lbs and could travel 180 kilometers.

In order to travel forward the rover had a T-bar controller located between both astronauts. This way either astronaut could drive. Most of the time the mission commander drove and he sat in the left hand seat.

Three sources provided navigation. A directional gyroscope for heading, odometer data from the wheels, and a signal processing unit provided bearing and velocity. The astronauts carefully had to watch how far they traveled away from the lunar module. If the vehicle broke down, they would have to walk back. Their spacesuits only allowed a certain amount of oxygen, so they needed to keep track of their distance. 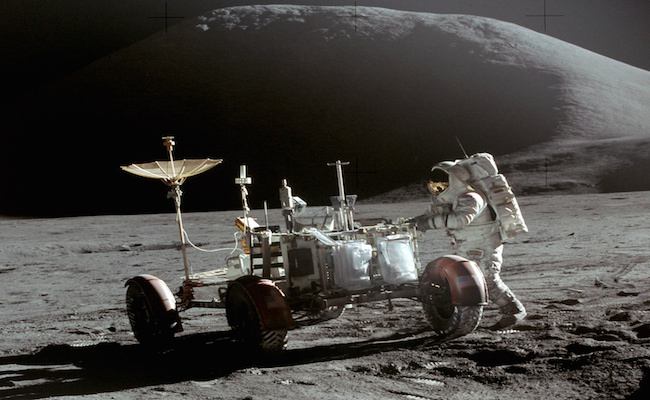 TV Cameras On The Moon

The Lunar Roving Vehicle came equipped with a television camera. The on-board television camera, remotely controlled from the ground, allowed viewers on Earth to become a “third astronaut”. On each mission, at the conclusion of the astronauts’ stay on the surface, the commander drove the Lunar Roving Vehicle to a position away from the Lunar Module so that the camera could record the ascent stage launch. The first two times they were unable to capture the launch, but on the third attempt they captured the launch.

Trips to circle the moon by private companies are planned for 2018. Maybe one day these same companies will have moon buggy traveling tours. It will be very interesting to see where the technology will one day lead us.