When one reflects upon the immensity of the universe, it stands to reason that it might be impossible to map it all out. Yet, John Hopkins University astronomers have done just that! Take a look.

Astronomer Brice Ménard and former computer science student Nikita Shtarkman used data that had been collected for more than fifteen years by a telescope in New Mexico.

Officially known as the Sloan Digital Sky Survey, the New Mexico-based telescope at the Apache Point Observatory has been functioning for more than twenty years and has captured different points of the night sky throughout the years, each encompassing millions of galaxies. The telescope used is a 2.5-meter wide-angle optical telescope for spectroscopic and multi-spectral imaging.

Astronomer Brice recounted how the astrophysicists on earth had always analyzed new data as it was collected, but no one had attempted to create a map of all the collected information.

A full map of the universe would be in the shape of a sphere. 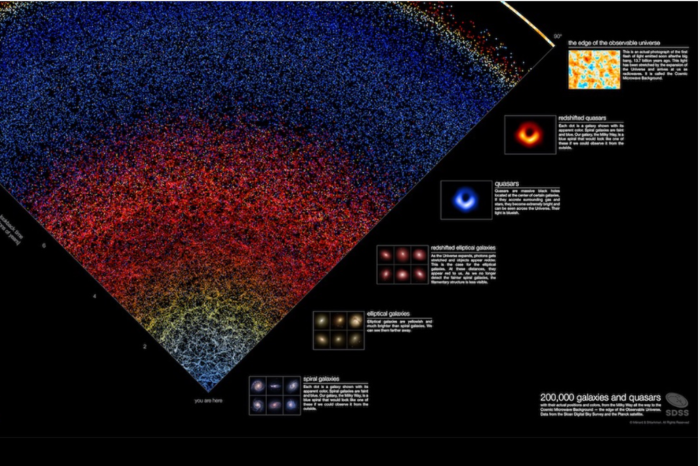 The new map actually only visualizes a thin piece of the universe with a thickness approximated at 10 degrees. This slice is estimated to contain approximately 200,000 different galaxies. Every individual dot visible on the map is a unique galaxy and every galaxy contains not millions but billions of planets and stars.

A favorite of star gazers worldwide, the Milky Way, is but one dot or pixel among many and it’s found at the bottom of the new map. The map shows everything from the Milky Way as far as scientists are able to see.

While our Milky Way galaxy is not the center of the universe and holds no special position within the universe, astronomers state that the map would appear more or less the same if viewed from any of the universe’s galaxies.

The creators specify that scientists possess even more astronomical information, but that it all cannot be replicated on a map that is two-dimensional as the image would end up being saturated with bright dots.

The map shows the expansive beauty of the universe colorfully. 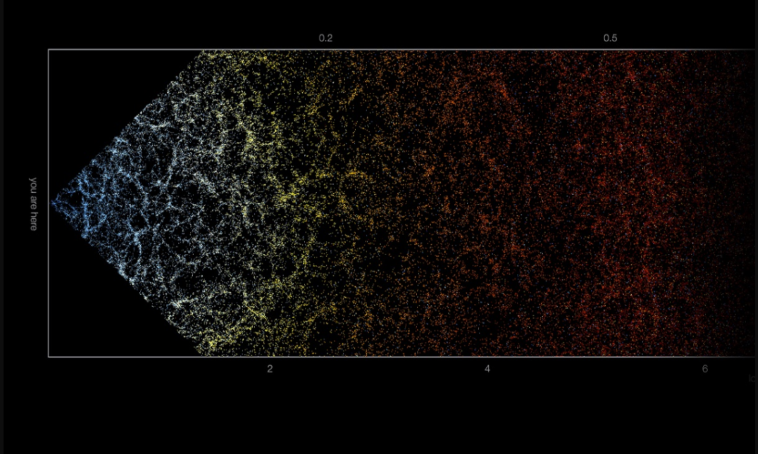 The farther galaxies are, the redder they appear; however, our Universe continues to expand with time.

What’s more, the universe’s first emission of radiation after the Big Bang from 13.7 billion years ago appears at the map’s top although this is not light, but radiation in the form of radio waves referred to as the “Cosmic Microwave Background”.

It is considered the observable universe’s edge. This Microwave background was observed by the European Space Agency’s “Planck Space Telescope”.

The light that is emitted on the other side of this edge has not yet reached the planet earth due to unimaginably long travel time.

The map showcases scientific discovery, history, and dimensions practically beyond our comprehension.

The map hints at the immensity of the universe starkly in contrast to the photos of single galaxies available for viewing until now. The beauty and scale of the map’s single slice of the universe are undoubtedly awe-inspiring both for what we can see, and even more for what we are still unable to see.

What’s best about the new map is that it is available to the public!

For the first time, armchair amateur astronomers and star gazers can travel through the universe and view space without leaving home.

Up until the map’s creation, only scientists had access to this wealth of astronomical information.

Now, the creation of this interactive map of the universe can be downloaded for free online by anyone! It is scientifically accurate and hypnotically beautiful, and anyone can get a peek at what the universe is all about.