Always wanted to know more about the planet Mercury? Search no further! Read how Mercury came into existence, where Mercury can be found, how the planet works and when you can view the planet from Earth!

In this blog we share various facts about Mercury with you. For example, did you know that Mercury is the planet closest to the sun? On top of that, it is also the smallest planet in our solar system! The planet is very impressive and we would like to tell you some interesting facts about it. Want to know more about our planet Mercury? Read along!

Mercury is about 4.57 billion years old and originated from the so-called Solar Nebula, just like the other astronomical objects in our solar system. As mentioned, it is the 1st planet from the Sun. Moreover, it is the smallest planet of our solar system, the planet Mars comes in second place.

The planet looks a bit like the moon. In addition, the planet is a so-called “terrestrial planet”, which means that the surface of the planet is made up of solids. Mercury received its name from Roman mythology. Mercury was the god of trade, travelers and profit.

As indicated, the surface of Mercury is similar to that of the moon. This is because the planet is covered with impact craters. It is also covered with valleys, hills and various plains. In addition, certain craters on the poles of Mercurius also contain ice.

Researchers believe there has been active volcanism on Mercury in the past. Indeed, while studying photographs in the late 1990s, it was discovered that some areas on the planet’s surface are smoother than others. This smoothness is caused by solidified lava. 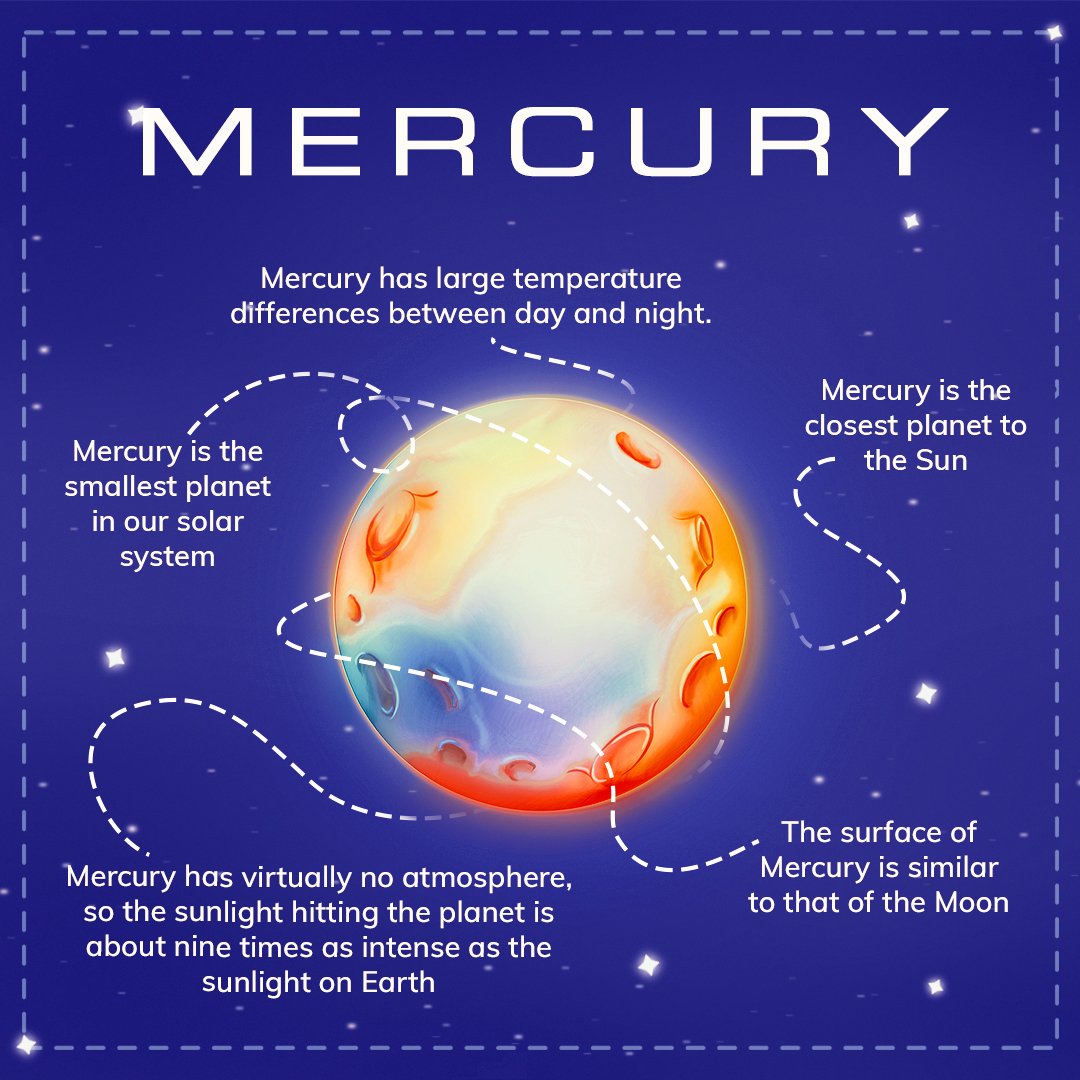 The planet Mercury in our Milky Way

Despite the fact that Mercury looks like our moon, the planet can hardly be compared to the Earth. For example, one day on the planet lasts well over 176 Earth days. In addition, the planet has large temperature differences between day and night. While it can reach 427 degrees during the day, the temperature drops to -170 degrees at night! The extremeness of this daytime temperature is because the planet is close to the Sun. Moreover, Mercury has virtually no atmosphere, so the sunlight hitting the planet is about nine times as intense as the sunlight on Earth!

Mercury orbits the Sun in 87 Earth days, but needs 58 Earth days to orbit its own axis. This means that a year on Mercury lasts just a little longer than one day!

Of all the planets in the solar system, Mercury has the orbit with the greatest deviations. Which means the orbit deviates a lot from a circle. As a result, the distance from the planet to the Sun can show differences of 46 to 70 million kilometers.

Of all planets, the planet Mercury is on average closest to Earth. In addition, the planet is closest to our Sun. Because it is so close to the Sun, the Sun appears about 2.5 times bigger in the sky than on Earth. From Mercury, the best visible planet is the planet Venus. The Earth and our moon are also visible. Mercury has no moons.

Living on the planet Mercury?

Since the planet Mercury has virtually no atmosphere, it is a planet on which nothing could survive.Besides, life on this planet does not necessarily sound like fun with such extreme temperatures!

Mercury is visible to the naked eye from Earth. You can only see the planet properly in the morning or evening twilight when the sun is still present. The planet is much less bright than the planet Venus. Because you often are limited by direct sunlight, it can be difficult to observe.

The planet Mercury is full of surprises!

In this blog, we introduced you to our planet Mercury, the first planet in our solar system measured from the sun. You now know what the planet looks like and that it resembles our moon in appearance. We also explained how the days and years on Mercury pass and that it is difficult to see the planet from the Earth. We have a perfect solution for this! Go on a journey through our solar system and view our stars and planets with the OSR Star Finder App, so you can see Mercury at any time of the day!